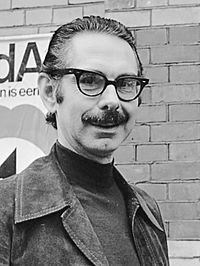 He escaped after Pinochet's coup d'état on September 11, 1973. He lived as a refugee in Cuba. As a young man he was an athlete, winning medals in the high jump event at the 1946 and 1947 South American Championships in Athletics. He returned to Chile after the end of Pinochet's dictatorship in 1993.

All content from Kiddle encyclopedia articles (including the article images and facts) can be freely used under Attribution-ShareAlike license, unless stated otherwise. Cite this article:
Carlos Altamirano Facts for Kids. Kiddle Encyclopedia.