Carlton is a city in Yamhill County, Oregon, United States. The population was 2,007 at the 2010 census. 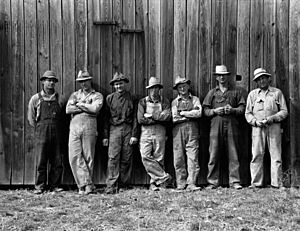 Dorothea Lange photo of farmers in West Carlton in 1939 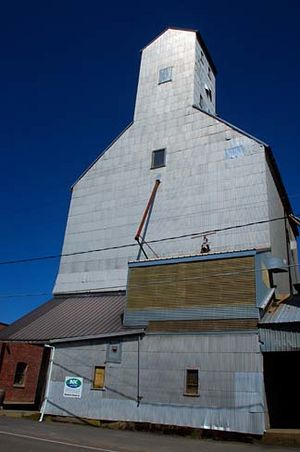 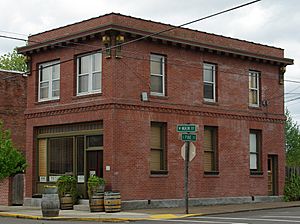 Carlton State and Savings Bank on Main Street is listed on the National Register of Historic Places.

The origin of Carlton's name is disputed. An ex-county commissioner claims that the name was derived from Wilson Carl, whereas A. E. Bones, postmaster at Carlton, stated in a 1925 letter that it was named for John Carl, Sr., at the request of R. R. Thompson. These men may have been part of the same family.

Carlton post office was established in 1874, with F. J. Fryer serving as its first postmaster.

Actual history of Carlton, Oregon: Prior to the post office inside the city of Carlton, Wilson Carl, owned the original Post Office, Stagecoach stop, and Blacksmith shop, for the area, about 7 miles West of Carlton, and his home was known as Mountain House. Wilson Carl was the original postmaster. Wilson Carl traveled with Dr. Joel Knight, on the Oregon Trail, to the area, as witnessed in the diary of Amelia Stewart Knight. Wilson Carl negotiated with the railroad in Portland, Oregon, to build closer to his property. Since the original plot was over the mountain West of Carlton, it was a matter of convenience for the railroad to build where it presently is, because negotiating the mountain was not feasible. The population of Carlton expanded to become the city of Carlton, around the railroad. The city is named after Wilson Carl, and, was originally called Carl's town, and, a few other variations of his name were used before the name became Carlton. Wilson Carl began as a pioneer carpenter/builder and shoemaker who became a wealthy land owner, who built a portion of what is now Linfield College, in McMinnville, and was founder of the Republican Party in McMinnville, County Commissioner, and, at one time owned the property that the Yamhill County Courthouse presently sits on. The original post office still exists on his original homestead and plot of land, though it has since been used as a residence for his heirs and is currently unoccupied. There is further information about the name variations used for Carlton, in a former Oregon Blue Book.

According to the United States Census Bureau, the city has a total area of 0.88 square miles (2.28 km2), all of it land.

There were 702 households of which 43.0% had children under the age of 18 living with them, 57.5% were married couples living together, 13.8% had a female householder with no husband present, 5.7% had a male householder with no wife present, and 22.9% were non-families. 17.0% of all households were made up of individuals and 6% had someone living alone who was 65 years of age or older. The average household size was 2.86 and the average family size was 3.22.

There were 540 households out of which 42.6% had children under the age of 18 living with them, 60.2% were married couples living together, 10.7% had a female householder with no husband present, and 23.7% were non-families. 19.4% of all households were made up of individuals and 6.3% had someone living alone who was 65 years of age or older. The average household size was 2.80 and the average family size was 3.23.

All content from Kiddle encyclopedia articles (including the article images and facts) can be freely used under Attribution-ShareAlike license, unless stated otherwise. Cite this article:
Carlton, Oregon Facts for Kids. Kiddle Encyclopedia.