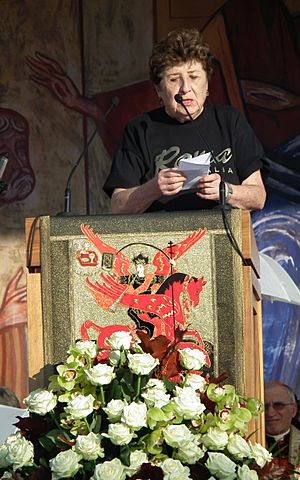 Carmen Hernández in the vocational meeting of the World Youth Day in Madrid.

María del Carmen Hernández Barrera (24 November 1930 – 19 July 2016) was a Spanish Roman Catholic catechist. She was the co-founder of the Neocatechumenal Way. She was born in Ólvega, Spain, but she moved with her family at a very young age to Tudela, Spain where she spent most of her childhood.

During this time, she met Kiko Argüello in Cursillo, and together they formed the Neocatechumenal Way in 1964.

All content from Kiddle encyclopedia articles (including the article images and facts) can be freely used under Attribution-ShareAlike license, unless stated otherwise. Cite this article:
Carmen Hernández Facts for Kids. Kiddle Encyclopedia.