Kids Encyclopedia Facts
Not to be confused with Carnegie Hall.

Carnegie Hall, Inc.’s signature slogan is Bringing the Arts to Life! Carnegie Hall, Inc. adopted its current mission statement on 2017: Carnegie Hall, Inc. is committed to cultivating an appreciation for creativity and excellence in the arts. In partnership with the community, Carnegie Hall presents a broad and diverse range of programs that engage, entertain, and educate people of all ages and backgrounds and works to preserve the historic significance of the Hall.

Originally known as the Lewisburg Academy, the school was founded around 1812 by Presbyterian pastor Dr. John McElhenny as a co-educational institution. For unclear reasons, the Lewisburg Academy separated into two schools, the Greenbrier Military School and the Lewisburg Female Institute, in the 1870s. The Lewisburg Female Institute (LFI) was a girls’ boarding school, and students could attend from grades 1-12. The focus of LFI changed in 1937; women could only attend for four years, two years of high school and two years of college. There was always a heavy emphasis on the arts, with the majority of students enrolled in at least music class in the early 20th century. Throughout its history, girls could take courses in a variety of subjects including math, English, history, science, Bible, music, home economics, and secretarial work. On December 16, 1901, a fire destroyed the original buildings of the LFI. Classes were held at City Hall and The Greenbrier for the remainder of the year. 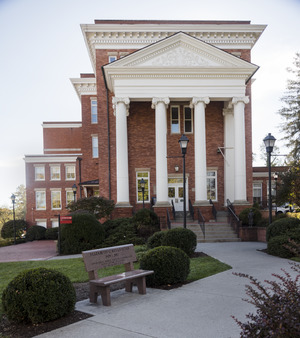 In the search for funding, the Rev. Dr. R. L. Telford, who was president of the Institute from 1892-1911, wrote to Mr. James Bertram, private secretary to Andrew Carnegie. Known for his philanthropic efforts, Carnegie initially donated $20,000 for the new building then contributed another $6,750 for the completion of the auditorium. Carnegie asked the local community to contribute $10,000. The total cost of construction would be a little over $1 million in today's dollars.

Due to low enrollment and financial reasons, Greenbrier College closed its doors in May 1972. After the closure, Carnegie Hall became part of the Greenbrier Center, a facility for individuals with special needs. Rumors in the Lewisburg community swirled in the early 1980s that the building was going to be condemned and torn down. Realizing the historical significance of the building, several residents of Lewisburg founded Carnegie Hall, Inc in 1983. Initially, the public was offered free performances in the historic building in an effort to renew a sense of interest in culture and history in the region. The first official performance season began in 1990.

The building was damaged by a fire on Christmas Eve 1996, and Carnegie Hall, Inc. undertook a massive renovation to restore the building—a project that took nearly a year to complete.

Carnegie Hall, Inc.’s original structure was designed by architects Barrett & Thompson in 1902 in the Georgian Revival style, characterized foremost by its Ionic order portico with pediment, shouldered architrave trim, tall first floor windows and cornice with dentils. Keeping with this style, the remainder of the structure is composed of simple, rectangular blocks with flat roofs.

A major renovation was designed by architects TAG Galyean and Kreps & Kreps (now Kreps & Zachwieja) and completed on June 18, 1997 to accommodate an elevator, administrative offices and an accessible entrance to the building.

In 2006, renovations to the front entrance were completed to comply with ADA guidelines, including a ramp, floor leveling and parking.

Today, artists from all over the world perform in Carnegie Hall's Hamilton Auditorium. Notable performers include:

As a 501(c)(3) Carnegie Hall, Inc. also provides year-round arts education and programming for youth and adults in Southern West Virginia. Besides their Mainstage Series and Ivy Terrace Concert Series, Carnegie Hall hosts a variety of arts educational programming. Carnegie Hall hosts two fundraising events per year: Taste of Our Towns (TOOT), a street food festival hosted annually on the second Saturday in October; and the Carnegie Hall Gala, held since 2017 at The Greenbrier in White Sulphur Springs. Carnegie Hall has three gallery spaces and is the permanent home of the West Virginia Music Hall of Fame. Visitors can explore the building alone or take a guided tour.

Seven other Halls are currently in use around the world as performance venues, as was their original intent. There is:

All content from Kiddle encyclopedia articles (including the article images and facts) can be freely used under Attribution-ShareAlike license, unless stated otherwise. Cite this article:
Carnegie Hall, Inc. Facts for Kids. Kiddle Encyclopedia.