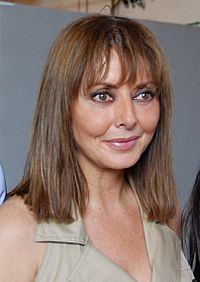 Carol Jean Vorderman (born 24 December 1960) is a British television presenter. She was born in Bedford and raised in Prestatyn, North Wales. Her father was Dutch; her mother is Welsh. She studied engineering at Sidney Sussex College, University of Cambridge. She is best known for having picked the letters and numbers for the Channel 4 game show Countdown. She is a regular panellist on ITV1 talk show Loose Women. She was a contestant in the second series of Strictly Come Dancing in 2004. In 2013 she presented a series about cooking on ITV called Food Glorious Food. She has written books about detox diets.

All content from Kiddle encyclopedia articles (including the article images and facts) can be freely used under Attribution-ShareAlike license, unless stated otherwise. Cite this article:
Carol Vorderman Facts for Kids. Kiddle Encyclopedia.