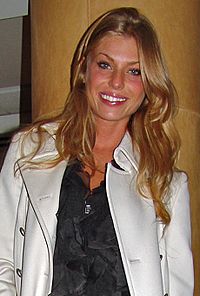 Caroline Bittencourt (13 December 1981 – 28 April 2019) was a Brazilian model and television presenter. In 1997, she started her modelling career at the age of 15. She lived in Italy for a time and worked for fashion houses such as Valentino and Roberto Cavalli. She later worked on television for RedeTV!, as a reporter for the Top Report program, and on RecordTV's Hoje em Dia. She was born in São Paulo.

On 28 April 2019, Bittencourt died by drowning during a boat trip off the coast of Ilhabela, São Paulo state. She was 37.

All content from Kiddle encyclopedia articles (including the article images and facts) can be freely used under Attribution-ShareAlike license, unless stated otherwise. Cite this article:
Caroline Bittencourt Facts for Kids. Kiddle Encyclopedia.