Caroline Street (Welsh: Stryd Caroline) is a pedestrianised street running east/west in the lower part of Cardiff city centre, located between The Hayes and St. Mary's Street. It is known locally as Chippy Lane due to the density of fast food shops along the street.

Located within the original town walls of Cardiff, and just south of the original Cardiff Gaol, much as though its modern form caters for the eating needs of the public, a number of buildings in Caroline Street have listed building status. Caroline Street was renamed in the Victorian era after Caroline of Brunswick, the wife of King George IV. The next street south is Charlotte Street, named after their daughter Princess Charlotte of Wales. In 1857, the same year that the last public execution took place in Cardiff, records show that 150 died as a result of an outbreak of smallpox on Caroline Street. 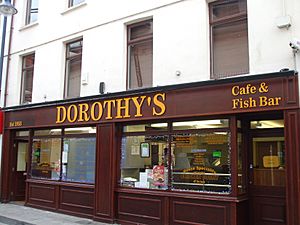 Up until the post-World War II period, the street was a traditional mixed-trading street, with occupants including butchers and cobblers. 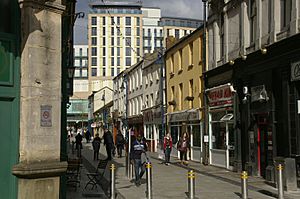 Since that time, the number of family and privately owned fast food outlets has steadily increased, and as of 2011 only a single outlet for Greggs bakery is resident on the Hayes end of the street, keeping Caroline Street relatively free of national and international chains and franchises. Dorothy's claims to be the oldest resident fast food shop on Caroline Street, which is a fish and chip shop. The favourite fare served by all shops includes the preferred South Wales delicacy of curry sauce and chips. Colloquially locals call the street Chippy Alley. 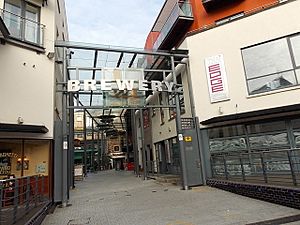 Entrance to the Brewery Quarter on Caroline Street

In 2003, after the development of the mixed-use Old Brewery Quarter from Brains Brewery former premises, and the proposed redevelopment of both the St David's Centre and The Hayes, it was decided to refurbish Caroline Street. Pedestrianised, the street floor structure was given a stone based easy-clean finish, although late at night this has still not resolved the problem of pedestrians slipping even when sober, due to the sheer volume of food packaging and food waste which the street accumulates. It has however made it far easier to clean and keep clean.

All content from Kiddle encyclopedia articles (including the article images and facts) can be freely used under Attribution-ShareAlike license, unless stated otherwise. Cite this article:
Caroline Street (Cardiff) Facts for Kids. Kiddle Encyclopedia.