Carolyn Mary Kleefeld is an American artist and poet. She has had numerous exhibitions and gallery and museum awards between 1981 and today in the major cities of the United States. Since 1981, Ms. Kleefeld has created several paintings and drawings, ranging from romantic figurative to abstract. 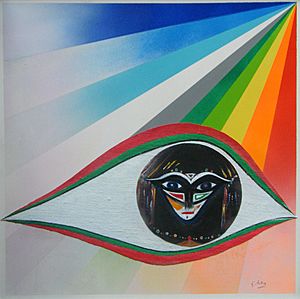 Kleefeld was born in Catford, England, and moved to Southern California when she was a child. She currently lives in a cliffside house in Big Sur, California.

Kleefeld attended UCLA from 1974 to 1978, studying art and psychology.

Kleefeld is an Honorary Member of IMMAGINE&POESIA, the artistic literary movement founded in Turin, Italy, with the patronage of Aeronwy Thomas (Dylan Thomas's daughter).

All content from Kiddle encyclopedia articles (including the article images and facts) can be freely used under Attribution-ShareAlike license, unless stated otherwise. Cite this article:
Carolyn Mary Kleefeld Facts for Kids. Kiddle Encyclopedia.