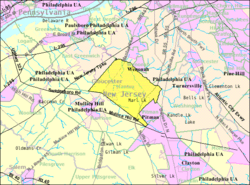 Carpenter's Landing was a mercantile settlement located at the head of sloop navigation on Mantua Creek in Mantua Township, Gloucester County, New Jersey.

In the late 1780s, Thomas Carpenter (1752-1847) moved to Carpenter's Landing and established a store and lumber business. In the 1860s, it was described as "a place of considerable trade in lumber, cordwood, etc., and contains one tavern, two stores, 30 dwellings and a Methodist church". The landing is said to have been named either for a man named Carpenter who built boats at the site during its mercantile boom days, or Edward Carpenter (son of Thomas Carpenter and descendant of Samuel Carpenter of Philadelphia, Pennsylvania) who owned the Heston & Carpenter Glass Works at nearby Glassboro, New Jersey in 1786 in partnership with Col. Thomas Heston, his wife's nephew.

All content from Kiddle encyclopedia articles (including the article images and facts) can be freely used under Attribution-ShareAlike license, unless stated otherwise. Cite this article:
Carpenter's Landing, New Jersey Facts for Kids. Kiddle Encyclopedia.