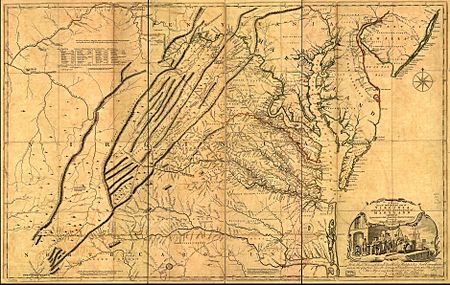 Carpenter Creek in western Virginia, now known as Potts Creek, was shown on a map of the area drawn by Joshua Fry and Peter Jefferson in 1751 and printed in 1755, and so called in the text of Thomas Jefferson's "Notes on the State of Virginia" that he prepared in the 1780s. Carpenter's Creek is also shown as such on John Ballendine's map of the James River published c1772 and Thomas Hutchins' map of the western regions of Virginia published in 1778.

The creek later acquired the name Potts Creek from a settler who lived further up the valley at the headwaters of the creek on Potts Mountain. The Carpenter name persisted in occasional use through at least 1784, when in a report to George Washington it was confused with Dunlap's Creek, and a grant was identified as located on Carpenter's "River" on July 1, 1793, but the name Potts Creek was in common use by the late 1790s. Carpenter's Creek received its name from Joseph Carpenter, who on June 1, 1750 received a patent from the British Crown for 782 acres (3.16 km2) of land on the south side of the Big Bend of Jackson's River (Jackson River (Virginia)) where the creek flows into the river.

All content from Kiddle encyclopedia articles (including the article images and facts) can be freely used under Attribution-ShareAlike license, unless stated otherwise. Cite this article:
Carpenter Creek Facts for Kids. Kiddle Encyclopedia.