Carpow is a diffuse hamlet in Perth and Kinross, Scotland. It is situated immediately to the east of the confluence of the River Tay and River Earn, 2 km north east of Abernethy.

The name Carpow is of Pictish origin. The first element is *cair, meaning "fort, castle", and the second is *pol, meaning "(sluggish) burn" (c.f. Welsh caer-pwll).

Carpow is most notable for its archaeological remains. During Roman times the settlement was the site of a camp and fort, which was made of stone, signalling the intent to stay for an extended period. An early medieval Picto-Scottish cross fragment once formed part the lintel of a well at Carpow House. 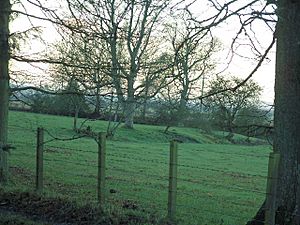 The Roman fort of Carpow was a Roman fortress situated at the confluence of the rivers Tay and Earn. The fortress is known to have been occupied from the late second century AD until the early third century AD. The site of the fort has not been comprehensively excavated but it is believed to have served as a naval supply depot for Roman forces in the central lowlands. Its occupation also coincided with the campaigns of Septimius Severus in the area.

All content from Kiddle encyclopedia articles (including the article images and facts) can be freely used under Attribution-ShareAlike license, unless stated otherwise. Cite this article:
Carpow Facts for Kids. Kiddle Encyclopedia.