Carriageworks is a multi-arts urban cultural precinct located at the former Eveleigh Railway Workshops in Redfern, Sydney, Australia. Carriageworks showcases contemporary art and performing arts, as well as being used for filming, festivals, fairs and commercial exhibitions. The largest such venue in Australia, it is a cultural facility of the NSW Government, and receives support from Create NSW and the Australian Government through the Australia Council for the Arts. The centre has commissioned new work by Australian and international artists, and has been home to eight theatre, dance and film companies, including Performance Space, Sydney Chamber Opera and Moogahlin Performing Arts, and a weekly farmers' market has operated there for many years.

On 4 May 2020 Carriageworks Ltd, the company that operates the venue, declared it would be entering voluntary administration and closing, citing an “irreparable loss of income” due to government bans on events during the COVID-19 pandemic, and the consequent negative impact on the arts sector.

The 51-hectare (130-acre) Eveleigh Rail Complex Yards were built on the site between 1880 and 1889, including the heritage-listed Eveleigh Railway Workshops, and the decommissioned Eveleigh Carriage Workshops site, part of which is occupied by Carriageworks. The rail yards contain the history of Australia's major rail network. Train carriages for Sydney's expanding rail network were built and maintained within the building and included the Royal Carriages constructed specifically for the Governor General of Australia and visiting Royalty, the first electric carriage, and the first air-conditioned train in Australia. From 1973 productivity at the site declined due to its inefficient older buildings, restrictive union practices and increased privatization of carriage construction and the site was closed in 1988.

In June 2002, the NSW Ministry for the Arts completed the purchase of the Carriage and Blacksmith Workshops at the Eveleigh Rail Yards site. Soon after, a construction project on the site commenced under the name of Carriageworks. Adaptive reuse of the workshop site began in 2003 with the housing of numerous contemporary arts practitioners, and Carriageworks was officially opened in 2007. In 2008 the Australian Institute of Architects awarded Tonkin Zulaikha Greer with the AIA Architecture Award for the adaptive reuse of CarriageWorks, and the AIA Greenway Award for the heritage work. 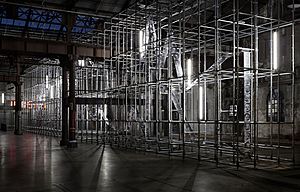 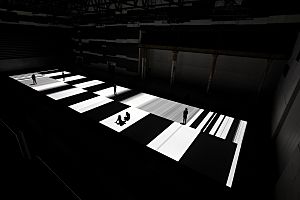 Ryoji Ikeda, test pattern [no.5], 2013, audiovisual installation at Carriageworks. Commissioned and presented by Carriageworks and ISEA2013 in collaboration with Vivid Sydney

In August 2013, the Carriageworks cultural precinct doubled in size, adding 5,000 square metres (54,000 sq ft) to its existing premises in Sydney's Redfern. Major programs presented at Carriageworks in 2013 included Ryoji Ikeda's Test pattern (No 5) presented in association with Vivid Sydney 2013 attended by over 56,000, FBi Radio's 10th Birthday attended by 8,000 and Mercedes-Benz Fashion Week Australia attended by over 35,000. In 2014 Carriageworks presented Christian Boltanski’s Chance, Ganesh Versus The Third Reich by Back to Back Theatre, Tehching Hsieh’s Time Clock Piece, Stones in Her Mouth by Mau and presented by Carriageworks, Concertgebouw Brugge and Tjibaou Cultural Centre, and more. 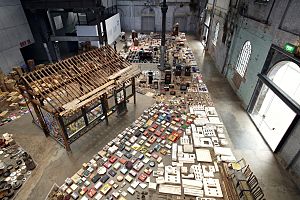 Song Dong, Waste Not (detail), 2013, Installation at Carriageworks, Sydney. Exhibition presented with 4A Centre for Contemporary Asian Art in association with Sydney Festival. Courtesy of the artist & Tokyo Gallery + BTAP. 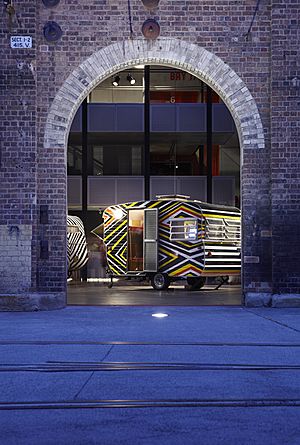 In 2015 exhibitions included Sydney Buddha by Zhang Huan, 24 Frames Per Second an exhibition of 24 screen-based works of 18 Australian and 6 international artists, Siamani Samoa by Michel Tuffery and the Royal Samoan Police Band, Ryoji Ikeda with Superposition, and Xavier Le Roy's Self Unfinished presented by Carriageworks and Kaldor Public Art Projects.

On 4 May 2020, the company operating the venue, Carriageworks Ltd, declared it would be entering voluntary administration and closing, citing an “irreparable loss of income” due to government bans on events during the COVID-19 pandemic and the consequent negative impact on the arts sector. Having appointed KPMG as Voluntary Administrators, the Carriageworks management and stakeholders began working together to explore possibilities for its future. Carriageworks was the first major arts venue in the country to collapse during the pandemic.

Among the options being floated to ensure Carriageworks' survival are a takeover by the Sydney Opera House and a rescue plan by a group of philanthropists. An arts hub for Indigenous Australians has also been suggested. The Media, Entertainment and Arts Alliance has called for an urgent rescue by the state government.

Carriageworks is Australia's largest contemporary multi-arts centre. It has been supported by the New South Wales Government, receiving funding through Create NSW, and also federal government through the Australia Council.

Its vision is "to be recognized as a multi-arts urban cultural precinct that engages and inspires Sydney’s culturally diverse communities", and to that end has presented a varied, multi-disciplinary and multi-cultural program for many years which has attracted over 400,000 visitors and up to a million visitors per year. Carriageworks has commissioned Australian and international artists "to make monumental new work that intersects with contemporary ideas" and it has striven to reflect the diversity of the community in its exhibits and performances.

The venue is managed by Carriageworks Ltd, which also manages Bays 22-24 (additional spaces available for hire). Carriageworks is a short-term tenant, with the property owned by the NSW government.

Between 2012 and 2018, Carriageworks only made a profit in one year. In 2018, the centre obtained A$3.8 million in government grants, with the rest of its A$7.8 million of income from sources such as donations and bequests and sales of goods and services. This model works when times are good, but not in times of crisis. Federal funds via the Australia Council have been falling steadily since 2013–4, especially that directed to individual companies and artists. While Carriageworks was listed in the April 2020 four-year funding round, the cap of A$500,000 means there is not nearly enough to maintain a "world-class, heritage-listed venue" as well as provide an ambitious program of commissions. Create NSW has been spending much more on arts buildings than programming in recent years, and the NSW Government did not swiftly announce and deliver bail-out support for the arts during the COVID-19 crisis, as did the South Australian, Victorian and New South Wales governments.

Erth have been producing visual theatre since the 1990, including puppetry-based productions and community projects. The company is inspired by natural history, Indigenous Australian folklore, sociology and urban mythology. They have produced long-running shows such as Erth’s Dinosaur Zoo and Erth’s Prehistoric Aquarium, as well as new shows. The Liminal Hour and Winter Camp at Barangaroo for were commissioned for Vivid Sydney in 2018 and 2019.

Felix Media is an independent film company set up by film producers John Maynard and Bridget Ikin. Works include Coral, a work for the fulldome screen, by Lynette Wallworth; three multi-screen works Citizen's Band, The Calling, and In the ear of the tyrant by Angelica Mesiti; and the trilogy of adaptations by William Yang, Friends of Dorothy, My generation, and Bloodlinks.

Established in 2002 by artistic director Kate Champion and now led by Danielle Micich, Force Majeure produces dance theatre works, a combination of dance and storytelling. Apart from producing new works, the company trains and mentors both established artists and the next generation through their INCITE program.

Moogahlin Performing Arts is an Aboriginal theatre company formed in Redfern, Sydney in 2007, by a group of Aboriginal performing artists and community workers to honour the late Kevin Smith's request and in memory of the founding members of the Black Theatre. The company was incorporated in 2009, hosted by the Redfern Community Centre and Gadigal Information Service becoming a resident company of Carriageworks. Moogahlin works closely with emerging and established Aboriginal theatre practitioners and communities.

Performance Space is an organisation for the development and presentation of interdisciplinary arts and experimental theatre, established in 1983.

Marrugeku is led by co-artistic directors, choreographer/dancer Dalisa Pigram and director/dramaturg Rachael Swain, who have worked together for 23 years. The company has Indigenous and non-Indigenous Australians working together to create new dance dance performances, working from both Broome Western Australia, and Carriageworks.

Carriageworks Farmers Market, is a weekly farmers' market for over seventy regular stallholders featuring seasonal fresh produce including organic, biodynamic foods from farmers and food producers across rural and regional New South Wales. It has operated at the venue since 28 February 2009. The permanent market site is housed in the custom-renovated blacksmith's workshop. Before the COVID-19 pandemic, the market was attracting about 5,000 visitors each weekend.

All content from Kiddle encyclopedia articles (including the article images and facts) can be freely used under Attribution-ShareAlike license, unless stated otherwise. Cite this article:
Carriageworks Facts for Kids. Kiddle Encyclopedia.