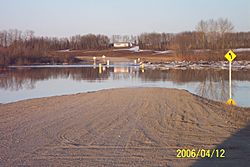 Another Carrot River enters Oxford Lake on the Hayes River.

During the 1980s the Royal Saskatchewan Museum explored the banks and rock edges of the Carrot River, because a local farmer had been finding numerous fossils in that area. The tests on the found fossils showed them to be approximately 92 million years old. The sites along the Carrot River proved to be some of the wealthiest deposits of fossils and showed deposits from numerous other species including sharks and fish.

The most notable find was in 1991, when the Royal Saskatchewan Museum and the Canadian Museum of Nature unearthed the six-metre fossil skeleton of an ancient crocodile, a Terminonaris robustus specimen named "Big Bert". Big Bert turned out to be very well-preserved and the only one of its kind found in Canada. They also found a complete fossil of Xiphactinus and toothed birds.

All content from Kiddle encyclopedia articles (including the article images and facts) can be freely used under Attribution-ShareAlike license, unless stated otherwise. Cite this article:
Carrot River Facts for Kids. Kiddle Encyclopedia.