Kids Encyclopedia Facts
This page is about the restaurant. For the South Park episode, see Casa Bonita (South Park).

Casa Bonita (Spanish; literally means "pretty house") is a former chain of Mexican-themed "eatertainment" restaurants which originated in Oklahoma City. The last restaurant in the former chain, which is located in Lakewood, Colorado, has yet to reopen after the State of Colorado ordered all restaurants in the state to close in March 2020 as a result of the COVID-19 pandemic.

There was also an unrelated northern Arizona chain of Mexican restaurants using the Casa Bonita name founded in 2003. Locations included Flagstaff, Cottonwood, Lake Havasu, Prescott, Prescott Valley, Sedona, and Paradise Valley. They were not related to the eatertainment franchise, and in 2011 they changed their name to Plaza Bonita.

Another unrelated restaurant of the same name is located in Libertyville, Illinois.

Founder Bill Waugh opened the first Casa Bonita restaurant in Oklahoma City, Oklahoma, in 1968. By the mid-1970s, the chain had expanded to locations in adjacent states and was known for its "all you can eat" beef or chicken plates and offering sopapillas—small squares of fried bread served with honey—with every meal.

In 1982, the company (including Taco Bueno fast food restaurants) was sold to Unigate (now Uniq plc). In 1992, Unigate sold the restaurants to CKE Restaurants, owners of Carl's Jr. In 1997, the two remaining Casa Bonita restaurants were spun off by CKE as part of Star Buffet. The Tulsa location closed in September 2005, then reopened for a 2-year run under the name Casa Viva, and went out of business in December 2007. Casa Bonita was reopened by Star Buffet under the original name in late July 2008. In March 2015, it was announced that the Lakewood Historical Society decided to make the restaurant a historic landmark of the city.

The first Casa Bonita was opened in the summer of 1968 in Oklahoma City, at a time when Mexican food was considered a novelty in the area. The restaurant was located along U.S. Route 66 at the intersection of NW 39th and Portland. On opening, it featured themed rooms, including the Garden Room and El Pokey, a room themed as a Mexican jail. The Oklahoma City location closed in 1993. After housing other businesses, the building was demolished in 2015.

The Tulsa location opened in 1971 near the intersection of 21st and Sheridan. The interior was designed to create the outdoor nighttime atmosphere of a Mexican village. Its various themed dining areas, with seating for over 500, included a village square with fountain, a 2-level lantern-lit cave, a tropical garden with 20-ft waterfall and stream, and a room resembling an aristocratic dining hall with a porch along with strolling mariachis. The Tulsa location also included a puppet and magic show theatre, a video arcade, a working carousel, and a gift shop.

It closed on September 30, 2005, due to a reported inability to reach suitable lease terms with the property owner. It was reopened, as Casa Viva, in May 2006 and then closed again in December 2007. In late July 2008, the restaurant, having been sold back to its previous owner group, reopened under the original Casa Bonita name. In February 2011, the restaurant failed to reopen after lengthy snowstorms hit Tulsa, and a sign on the door said it was closed for business. 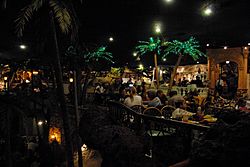 The Lakewood location was built in 1973 and opened in early 1974 on Colfax Avenue west of Denver, along U.S. Route 40/I-70 Business. Similar in architecture to the Tulsa location (both were previously large retail store locations), the Lakewood restaurant seats over 1000 people at a time, and features strolling mariachis, flame jugglers (No longer allowed in 2019 for violating fire code), and a 30-foot (9.1 m) waterfall with cliff divers. It also has a small puppet theater, a "haunted tunnel" called Black Bart's Cave, an arcade with a large skee-ball room, and a magic theater. It was designated a historic landmark of the city in March 2015.

In March 2020, the Lakewood location closed temporarily due to the COVID-19 pandemic, during which Colorado Governor Jared Polis stopped in-person dining for a two-month span from March 17 to May 26. In March, several employees reported that their most recent paychecks had bounced due to insufficient funds in the payroll account of Casa Bonita. The restaurant's website disappeared during the summer of 2020 sometime between July 7 and July 30. As of September 2020, the restaurant is still closed "due to Colorado-mandated regulations" during the pandemic.

All content from Kiddle encyclopedia articles (including the article images and facts) can be freely used under Attribution-ShareAlike license, unless stated otherwise. Cite this article:
Casa Bonita Facts for Kids. Kiddle Encyclopedia.