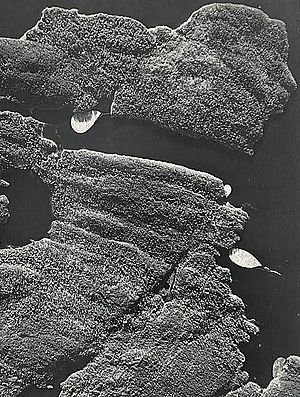 Aerial photo of three log booms on Cassels Lake waiting to be towed to the Gillies sawmill.

Cassels Lake (originally known as White Bear Lake) is a lake located within the Municipality of Temagami, in the Nipissing District, Ontario, Canada. It contains numerous portages, campsites and is one of three lakes on the eastern edge of the White Bear Forest.

In the 1920s a log dam was constructed at the narrows connecting Cassels Lake and Rabbit Lake to float logs from the surrounding area out to the Ottawa River. The water level in numerous lakes close to Temagami was increased numerous feet. The Gillies' Bros. logging company then cut the trees from the land and the flooded forest area leaving behind the snags and stumps seen in the water. The old growth white pine and red pine immediately south of the mill was never cut and remains today as the 400-year-old White Bear Forest. According to local folklore, this stand wasn't cut because the wife of the mill manager wanted to look out of her home on the majestic pine forest, and so forbid him from cutting there.

The White Bear Forest on the south side of the lake, opposite the former mill, is now a conservation reserve. The reserve has a system of hiking trails, which provide visitors with a great opportunity to experience the old growth pine forest.

All content from Kiddle encyclopedia articles (including the article images and facts) can be freely used under Attribution-ShareAlike license, unless stated otherwise. Cite this article:
Cassels Lake Facts for Kids. Kiddle Encyclopedia.