Cassytha filiformis, common name love-vine, is a species of obligate parasitic vine in the family Lauraceae. The species has a native pantropical distribution encompassing the Americas, Indomalaya, Australasia, Polynesia and tropical Africa In the Caribbean region, it is one of several plants known as "Love vine" because it has a reputation as an aphrodisiac.

Cassytha filiformis is a twining vine with an orange to pale green stem. Leaves are reduced to scales about 1 mm long. Flowers are borne in spikes or sometimes solitary. There are six tepals, each 0.1-2.0 mm long. Fruit is a drupe about 7 mm in diameter.

The 1889 book 'The Useful Native Plants of Australia records that the "This and other species of Cassytha are called " Dodder-laurel." The emphatic name of "Devil's guts" is largely used. It frequently connects bushes and trees by cords, and becomes a nuisance to the traveller. "This plant is used by the Brahmins of Southern India for seasoning their buttermilk. (Treasury of Botany?)".

A 2018 study revealed how a southern Florida subspecies of this widespread species is involved in a newly discovered form of trophic interaction involving gall-forming cynipid wasps. New tendrils will actively seek out galls made by the gall wasp, Belonocnema treatae, on leaves of a host oak tree, Quercus geminata. The findings show that galls attacked by haustoria were associated with a 45% less survival rate for the wasps, suggesting that C. filiformis has an important negative impact on gall wasp survival. In the study, other species of plant and wasp galls are parasitised by this plant in the southern Florida area too. 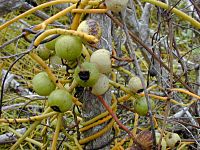 Clump of C. filiformis, on Florida Rosemary in SWFL. 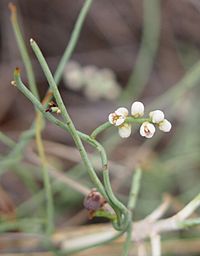 All content from Kiddle encyclopedia articles (including the article images and facts) can be freely used under Attribution-ShareAlike license, unless stated otherwise. Cite this article:
Cassytha filiformis Facts for Kids. Kiddle Encyclopedia.