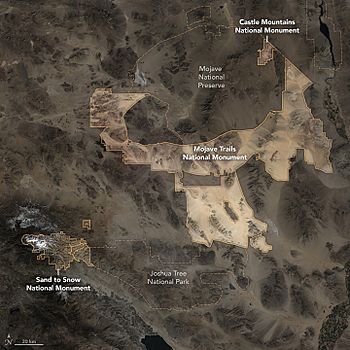 The park protects 20,920 acres, located between the interstates I−15 and I−40, and northwest of the Colorado River.

The national monument protects a section of the Castle Mountains, a range located in San Bernardino County and Clark County, Nevada. The range lies south and east of the New York Mountains, southwest of Searchlight and west of Cal-Nev-Ari, Nevada. The range lies at the northeastern end of Lanfair Valley and reaches 5,543 feet (1,690 m) in elevation at the summit of Hart Peak and 5580 ft at Linder Peak. The mountains lie in a southwest-northeasterly direction. The Piute Range lies to the southeast.

It surrounds the Castle Mountain Mine Area, an open pit gold mine in the southern Castle Mountains owned by Canadian NewCastle Gold Ltd., who can excavate nearly 10 million tons of ore through 2025, though due to low gold prices mining has been suspended since 2001. The national monument proclamation states that after any such mining and reclamation are completed, or after 10 years if no mining occurs, the Federal land in the 8,340 acre Castle Mountain Mine Area is to be transferred to the National Park Service.

All content from Kiddle encyclopedia articles (including the article images and facts) can be freely used under Attribution-ShareAlike license, unless stated otherwise. Cite this article:
Castle Mountains National Monument Facts for Kids. Kiddle Encyclopedia.