Kids Encyclopedia Facts
This page is about the town in New Zealand. For the retail park in Bournemouth, England, see Castlepoint Shopping Centre. 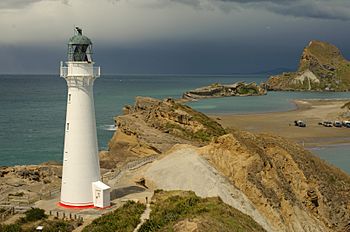 Castlepoint is a small beachside town on the Wairarapa coast of the Wellington Region of New Zealand. It is home to a lighthouse which stands near the top of the northern end of a reef. The reef is about one kilometer long. At the southern end of the reef, there is an island known locally as "seagull island", due to its large population of seagulls. The southern side of Castle Rock is known as Christmas Bay. Castlepoint is approximately one hour's drive from Masterton. The population of Castlepoint and its surrounds was 1,686 as recorded in the national Census of 2006.

Castlepoint was so named in 1770 by Captain Cook who was struck by the similarities of Castle Rock to the battlements of a castle. The Maori name for the area is Rangiwhakaoma, which translates as 'where the sky runs'. Smaller cetaceans such as dolphins frequent around Castlepoint while larger whales such as Southern Right Whales and Humpback Whales may be visible from the shores during their migration seasons. A book chronicling the history of Castlepoint, including Castlepoint Station, Castle Point Lighthouse and the local fishing industry was published in October 2010 by Hedleys Books or Masterton.

Castle Rock is a landmark in Castlepoint and is 162m high. It includes a walk through woods and over bridges and is a beautiful walk approx. 45 minutes long.

Mataikona Sand Dunes are an area of large sand dunes approximately 30 minutes north of Castlepoint towards the Matakona River mouth.

Remote from other settlements Castlepoint's beach has been home since 1872 to an historic annual horse race meeting when "local station hands rode on farm hacks competing for bottles of rum and any stray coins". 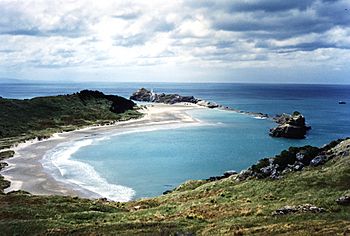 The Castle Point Lighthouse is a lighthouse near the village of Castle point in the Wellington Region of the North Island of New Zealand. It is owned and operated by Maritime New Zealand. In the early days of the 20th century Castle Point was one of the few lighthouses with easy access to a school. The Creamer family came there in 1918 or 1919 and the eldest son Eric had to complete five years of education in three years, so that he could go on to secondary school, there having been little education in previous locations where the family had been stationed. This aspect of the Keeper's lives seems to have been overlooked by the Marine Department. The light was built in 1913 and was originally fueled by oil. In 1954 the oil lamp was replaced with an electric one powered by a local diesel generator. This was subsequently replaced by a connection to the mains grid in 1961. The lighthouse, is popular with holiday makers and the lighthouse itself is sometimes referred to as "The Holiday Light".

The lighthouse is built out of steel sheets riveted together. This is an unusual method of construction for a lighthouse and the only one so built in New Zealand.

At sea, the light can be seen 22 miles away, and was used by sailors coming from South America to establish a point of reference when making for Wellington Harbour.

All content from Kiddle encyclopedia articles (including the article images and facts) can be freely used under Attribution-ShareAlike license, unless stated otherwise. Cite this article:
Castlepoint Facts for Kids. Kiddle Encyclopedia.