Castles in Tyne and Wear facts for kids 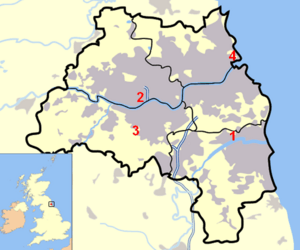 There are four castles in Tyne and Wear, a metropolitan county in North East England. One is a gatehouse, one is a keep, one is an enclosure and one is an artillery fort.

The purpose of a castle was not simply militaristic, but was also considered to be a stamp of authority over the population of an area and a status symbol. Some would have acted as centres of trade and administration for a manor. The earliest castle in Tyne and Wear is Tynemouth Castle.

All content from Kiddle encyclopedia articles (including the article images and facts) can be freely used under Attribution-ShareAlike license, unless stated otherwise. Cite this article:
Castles in Tyne and Wear Facts for Kids. Kiddle Encyclopedia.