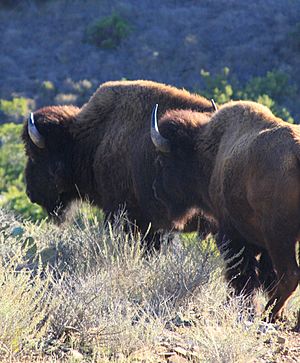 The Catalina Island bison herd is a herd of American bison on Catalina Island off the coast of southern California. The bison are popular with the tourists and buildings have painted images of bison and bison weather vanes. Over the decades, the bison herd grew to as many as 600. The population currently numbers approximately 150. Biologists found that the bison are not genuinely wild, thus also not purebred; their ancestry includes genes from the cattle, as well as smaller size, different length of legs, jaw length overbite, low fertility, and behavioral problems (such as punctuated walking in tight circles).

The bison herd is maintained and monitored by the Catalina Island Conservancy. Controlling the bison population is important for the island's ecological health. In the past, bison were routinely removed and sent to the mainland to auction. In 2004, the Conservancy partnered with the Morongo Band of Mission Indians, the Tongva (thought to be Catalina's original inhabitants some 7,000 years ago), and the Lakota tribe on the Rosebud Reservation in South Dakota. A hundred bison were relocated to the Great Plains. The Conservancy initiated a scientific study that determined that a herd of between 150 and 200 would be good for the bison, and ecologically sound for the island. Beginning in 2009, the herd was given animal birth control to maintain the population at around 150 animals.

Registered as privately-owned agricultural livestock in a fenced-restricted area, they were imported to in 1924 for the silent film version of Zane Grey's Western tale, The Vanishing American. However, the 1925 version of "The Vanishing American" does not contain any bison and shows no terrain that resembles Catalina, according to Jim Watson, columnist for The Catalina Islander newspaper. According to Watson, an October 6, 1938 article in The Catalina Islander attributes the bison arrival to the filming of "The Thundering Herd," a silent film released in 1925.

On Wednesday, August 26, 2015, a contract worker from American Conservation Experience was injured by a bison while working near Tower Peak on Catalina Island.

On Saturday, February 17, 2018, a man camping at the Little Harbor Campground was gored by a bison.

With the herd numbering around 100 animals in 2020 and no new bison births in several years, Catalina Island Conservancy made the decision to introduce two pregnant female bison by the end of the year. The new additions will enhance the genetics of the current bison population on the Island.

All content from Kiddle encyclopedia articles (including the article images and facts) can be freely used under Attribution-ShareAlike license, unless stated otherwise. Cite this article:
Catalina Island bison herd Facts for Kids. Kiddle Encyclopedia.