The Cathedral of Our Lady of the Angels (Spanish: Catedral de Nuestra Señora de los Ángeles), informally known as COLA or the Los Angeles Cathedral, is a cathedral of the Roman Catholic Church in Los Angeles, California, United States of America. Opened in 2002, it serves as the mother church for the Archdiocese of Los Angeles, as well as the seat of Archbishop José Horacio Gómez.

The structure replaced the Cathedral of Saint Vibiana, which was severely damaged in the 1994 Northridge earthquake. Under Cardinal Roger Mahony, Our Lady of the Angels was begun in 1998 and formally dedicated on September 2, 2002. There was considerable controversy over both its deconstructivist and modern design, costs incurred in its construction and furnishing, and the archdiocese's decision to build a crypt under the cathedral.

The cathedral is named in honor of the Virgin Mary under the patronal title of "Our Lady of the Angels", echoing the full name of the original settlement of Los Angeles (Spanish: El Pueblo de Nuestra Señora la Reina de los Ángeles, or "The Town of Our Lady the Queen of the Angels"). The cathedral is widely known for enshrining the relics of Saint Vibiana and tilma piece of Our Lady of Guadalupe. It is the mother church to approximately five million professed Catholics in the archdiocese. 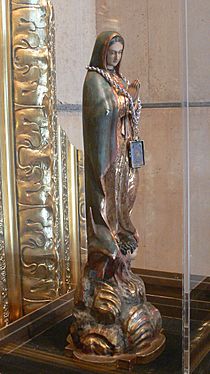 The Cathedral of Saint Vibiana had served as the cathedral of the Los Angeles see since its completion in 1876. Soon after its completion, the diocese noted it to be of inferior construction quality and also too small for Los Angeles' rapidly growing population. In 1904, Bishop Thomas James Conaty gained permission from the Holy See to build a new cathedral to be named after Our Lady of Guadalupe and purchased a site on which to build the cathedral. However, an economic downturn in 1907 put a stop to the project; a Catholic parish church was later built on the site. In the 1940s, plans were drawn up for a new cathedral on Wilshire Boulevard that would seat 3,000 people, and in 1945 Archbishop John Joseph Cantwell announced that the Holy See approved the name "Cathedral of Our Lady of the Angels". That cathedral was never built, however, as Cantwell died in 1947 and his successor, James Francis McIntyre, decided instead that building new parish churches and schools in the expanding metropolis was a more pressing need for the archdiocese. McIntyre gained permission from donors to redirect money donated for the Cantwell cathedral fund to those needs.

This legal battle prompted the archdiocese to look to build the cathedral on a new site. In December 1996, the archdiocese announced it was purchasing a 5.6-acre (2.3 ha) site between Temple Street and the Hollywood Freeway from Los Angeles County at a cost of $10.85 million. The archdiocese chose to retain the "Cathedral of Our Lady of the Angels" name approved by the Vatican in the 1940s. The initially proposed budget for the project was $150 million, rising to a final cost of $189.7 million. The construction was supervised by Father Richard S. Vosko, a liturgical design consultant and priest of the Diocese of Albany who has overseen the design and renovation of numerous churches and cathedrals in the United States. Construction began in 1998 and was completed in September 2002. Meanwhile, the old cathedral was eventually restored by developers Tom Gilmore and Richard Weintraub, who spent around $6 million converting it into an events center and performance venue. 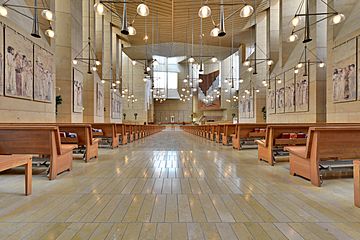 View of seating in the nave

The architect was Pritzker Prize-winning Spaniard Rafael Moneo. Using elements of postmodern architecture, the church and the Cathedral Center feature a series of acute and obtuse angles while avoiding right angles. Contemporary statuary and appointments decorate the complex. Prominent of these appointments are the bronze doors and the statue called The Virgin Mary, all adorning the entrance and designed by Robert Graham.

In addition to the church, the cathedral grounds also include a mausoleum, gift shop, cafe, conference center, and clergy residences. The relics of Saint Vibiana are interred in the mausoleum, as are the remains of several past bishops, archbishops, and auxiliary bishops of Los Angeles. The size of the cathedral is 6,038 square metres (64,990 sq ft). 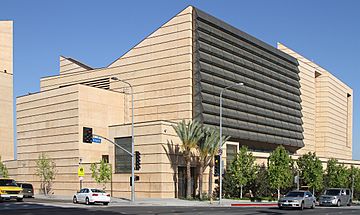 Others argued that a church of that size and expense was unnecessary, overly-elaborate and that the money could have been better spent on social programs, suggesting that either St. Vincent Church on West Adams Boulevard or St. Basil Church on South Kingsley Drive, despite their smaller size, could perform the functions required of a cathedral with minimal additional cost. Adding to the confusion, the cost of furnishings was inflated as critics erroneously equated the donation levels of Cathedral Naming Opportunities as the cost of those items.

Sir Daniel J. Donohue and the Thomas and Dorothy Leavey Foundation were instrumental to the project, as were other donors and supporters including members of the Disney family.

The organ is opus 75 of Dobson Pipe Organ Builders of Lake City, Iowa, and is a 105 rank/ 4 manual instrument that incorporates pipes from the 1929 Wangerin organ of St. Vibiana's Cathedral. Dobson's Opus 75 has a total of 6,019 pipes. It is the 89th largest pipe organ in North America and the 143rd largest in the world. The St. Vibiana instrument was rebuilt in 1988 by Austin Organs The organ case is approximately 60 feet (18 m) high, and is located approximately 24 feet (7.3 m) above the floor. To meet earthquake-stability requirements, the pipes and case are supported by a massive internal steel frame. 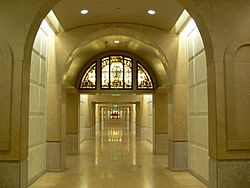 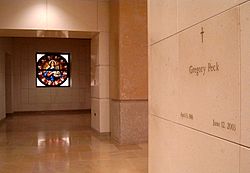 The cathedral features a mausoleum in its lower level, containing 1,270 crypts and 4,746 columbarium niches for burials. Proceeds from the sale of memorials and burial spaces are placed in an endowment fund to support the cathedral.

All past ordinaries of the archdiocese are memorialized in the mausoleum, including a future burial site for Cardinal Roger Mahony, and the remains of several ordinaries and auxiliary bishops who died before the cathedral was built were transferred there. The tomb of Saint Vibiana was transferred to the cathedral from its previous location above the altar at the Cathedral of Saint Vibiana; the tomb is the centerpiece of the St. Vibiana Chapel located adjacent to the mausoleum.

The crypt mausoleum features a number of stained glass windows that were originally installed in Saint Vibiana's Cathedral. This idea was suggested by Mario Agustin Locsin, a renowned Liturgical Artist and consultant on the renovation. The old cathedral windows were restored and two new windows featuring guardian angels created by the Judson Studios were placed at the entrance to the crypt mausoleum. 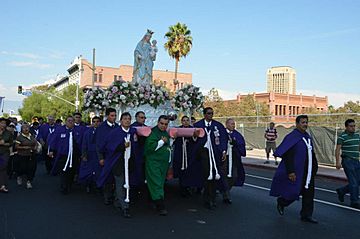 On September 3, 2011, the cathedral played host to a Votive Mass in honor of the Blessed Virgin Mary. The Mass marked the conclusion of the First Annual Grand Marian Procession organised by the Queen of Angels Foundation.

The cathedral was the location of some concerts by Libera.

Every Wednesday afternoon, the cathedral holds an organ recital. It is free and open to the public.

All content from Kiddle encyclopedia articles (including the article images and facts) can be freely used under Attribution-ShareAlike license, unless stated otherwise. Cite this article:
Cathedral of Our Lady of the Angels (Los Angeles) Facts for Kids. Kiddle Encyclopedia.