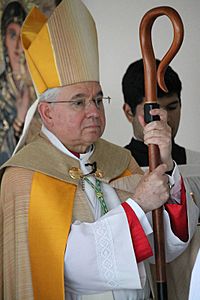 José Horacio Gómez (born December 26, 1951) is a Mexican-born American prelate of the Catholic Church. He was born in Monterrey, Mexico. He has been the fifth Archbishop of Los Angeles since 2011.

All content from Kiddle encyclopedia articles (including the article images and facts) can be freely used under Attribution-ShareAlike license, unless stated otherwise. Cite this article:
José Horacio Gómez Facts for Kids. Kiddle Encyclopedia.