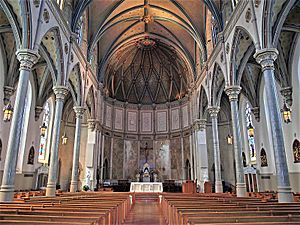 During its days as a parish, its most famous pastor was Father James Coyle. There is the aspiration of relocating his remains from Elmwood Cemetery to the cathedral as the cause for his beatification as a martyr advances.

The contractor that had to be talked into moving to Birmingham to build the project was Lawrence Scully. Just prior to its completion, Lawrence Scully was killed when his horse-drawn carriage was spooked by a passing motor vehicle that honked its horn. The horse reared and flipped the carriage over, killing Lawrence Scully. Lawrence Scully also built one of Birmingham's first public schools, the Powell School.

Two buildings, the church and associated school, were listed on the National Register of Historic Places as St. Paul's Catholic Church in 1982.

The stained glass-windows in the cathedral's aisles are the work of G.C. Riordan & Co. of Cincinnati. They were in place when the church was first used. The large window over the entrance was installed in 1972, replacing an older window that had been damaged in a storm.

All content from Kiddle encyclopedia articles (including the article images and facts) can be freely used under Attribution-ShareAlike license, unless stated otherwise. Cite this article:
Cathedral of Saint Paul (Birmingham, Alabama) Facts for Kids. Kiddle Encyclopedia.