Cathedral of the Holy Trinity (Quebec) facts for kids

When it was formed the Diocese of Quebec covered both Upper and Lower Canada. Today, its territory covers 720,000 km2 in the central and eastern parts of the province of Quebec but does not include the area around Montreal. It has 7,817 Anglicans on the parish rolls in 93 congregations. The Cathedral of the Holy Trinity was designated a National Historic Site of Canada in 1989 and plaqued in 1993. It has also been designated under provincial heritage legislation. 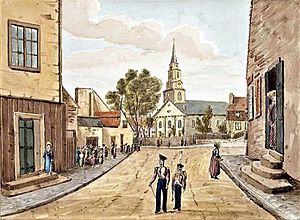 View of the Anglican cathedral from Ursulines of Quebec, 1830

The Diocese of Quebec was founded in 1793 and its first bishop, Dr. Jacob Mountain, gave his early attention to the erection of a cathedral. The completed building, designed by military officers William Robe and William Hall and built between 1800 and 1804, was consecrated on August 28, 1804. It was the first Anglican cathedral to be built outside of the British Isles.

Designed in the neoclassic Palladian style, the Cathedral was modeled after the St Martin-in-the-Fields Church in Trafalgar Square, London, and the Marylebone Chapel (now known as St Peter, Vere Street). King George III paid for the construction of the Cathedral and provided a folio Bible, communion silverware and large prayer books to be used for worship.

The bell-tower is home to 8 bells, founded by Whitechapel in 1830, and are the oldest change-ringing peal in Canada. Due to deterioration, they were brought down in 2006, sent to Whitechapel in London for retuning, and reinstalled in April 2007.

All content from Kiddle encyclopedia articles (including the article images and facts) can be freely used under Attribution-ShareAlike license, unless stated otherwise. Cite this article:
Cathedral of the Holy Trinity (Quebec) Facts for Kids. Kiddle Encyclopedia.