Nepeta cataria, catnip or catmint, is a species of the genus Nepeta. It is in the Lamiaceae family. The name "catmint" is sometimes used for the genus as a whole. 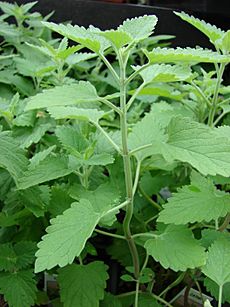 Catnip, and some other species in the genus Nepeta, is known for its effects on cat behaviour. Cats rub on the plant, roll on the ground, paw at it, lick it, and chew it. Some leap about and purr, some cry out. Cats do it for about five to fifteen minutes, after which olfactory fatigue usually sets in.

The catnip effect works on the whole cat family, not just on domestic cats.. Several tests showed that leopards, cougars, servals, and lynxes often reacted strongly to catnip in a manner similar to domestic cats. Lions and tigers may react strongly as well, but they don't react all the time.

With domestic cats, N. cataria is a recreational substance for pets to enjoy. Catnip and catnip-laced products are available to consumers. Not all cats are affected by catnip; roughly one third are not affected by the plant. The behavior is hereditary.

Some other plants also have a similar effect on cats, include valerian (Valeriana officinalis).

All content from Kiddle encyclopedia articles (including the article images and facts) can be freely used under Attribution-ShareAlike license, unless stated otherwise. Cite this article:
Catnip Facts for Kids. Kiddle Encyclopedia.