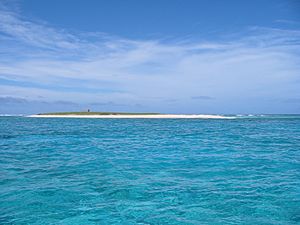 Cato Reef, a part of Cato Bank, is an area in the Coral Sea off the central coast of Queensland, Australia. 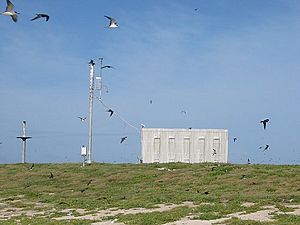 The island is a mound of coral debris and grit 5.8 m (19 ft) high, covered in grass and creepers up to 1 m (3.3 ft) high. An automatic weather station, with two radio masts and a silver-painted hut, stands on the island's northeast end. The island is almost entirely surrounded by reefs: three narrow boat passages cross the reefs on the northern side. The best entrance is the center one, located 350 metres (1,150 ft) north of the eastern end of Cato Island; it has a conspicuous rock at half tide on its eastern side.

The island lies on the western end of an oval-shaped reef enclosing a lagoon. The lagoon contains numerous coral heads. The sea breaks over the reef in all weather. The reef lies on Cato Bank, which falls away steeply on all sides.

The coral reefs are built on the top of a large shield volcano, produced by eruptions of the Tasmantid Seamount Chain.

Cato Island, and then Bird Islet, were found by Captain John Park on Cato and Lt. Robert Fowler on HMS Porpoise on 17 August 1803. Porpoise ran aground on Wreck Reef. Matthew Flinders (1814) on Porpoise reported that the cays held many birds, laying eggs from August–October. On 1 April 1821, the whaler Echo was wrecked on the shoal, though her crew was saved.

Cato Reef remained a hazard to shipping crossing between Australia and Canton (modern day Guangzhou) or India (where cargo was collected on the way home from Australia to Europe). In due course the southern reefs were surveyed by Captain H. M. Denham (ms, 1860) on HMS Herald in 1858–60.

The area was visited by increasing numbers of whalers during the off season in New Zealand, in search of the wintering humpback and sperm whales in the middle of the 19th century. Denham reported that in July 1863 the islets had only two or three plants, including a bush 3–4 m (9.8–13.1 ft) high, and were frequented by sea turtles weighing 60–100 kg (130–220 lb).

On 12 October 1858, Denham reported that Cato Island was more substantial than other cays in the area, measuring 1⁄3 by 1⁄6 mile (0.54 by 0.27 km), rising to 19 feet (5.8 m), and covered in coarse tufted grass, Rottboilla; a creeping plant, Nyctagin portulaca; and a sort of buttercup Senebiera crucifera, undermined and fertilised by burrowing mutton birds, the only species that the sailors chose to eat. Dense colonies of gannets, man-of-war birds and boatswain birds, terns and noddies, with eggs and chicks were abundant. Denham shot a godwit and a brace of plovers. Whalers recorded repeated visits, but only one humpback was reported offshore. Rayner recorded Limosa, Charadrius, Strepsilas interpres, and a land rail. When they returned with plants from the Percy Isles and seeds from Sydney to provide succour for castaways in August 1859, Denham again reported that the birds formed a cloud hovering 60 feet (18 m) above the island, though "a few visits like ours would tend to check the accumulation in proportion to each boat bringing off upwards of 100 dozen eggs at a three hours gleaning."

The log of the Daily Southern Cross, 19 September 1863, reported on page 2 that a memorandum, enclosed in a bottle, was picked up by Captain Harris, of Caroline, which arrived in Hobson's Bay during Wednesday night, with a cargo of guano from Cato Island, and was found on the Cato Bank:- "25 June 1863 – Prince Edward, of Auckland, Geo. Cook, master, 7 weeks from Bay of Islands, 80 sperm, 6 of blackfish. All well." – Argus, 26 August.

On 3 August 1853, Dockenhuden, a German ship in transit between Melbourne and Bombay, failed in a tack off Cato Reef and having no room to jibe, struck the reef and foundered. The crew spent 15 days repairing the ship's boats before leaving for Moreton Bay, which was reached on 27 August.

Thomas King, a barque of 346 tons, built for the West Indian sugar run, was taken to Australia for the gold rush. Captain J. H. Walker, with a crew shanghaied with the help of local police, after the original English crew had deserted for the gold fields, left Sydney on 4 April 1852 for the Philippines and China with a cargo of sugar and spirits. It wrecked on a reef east of Cato Reef, Queensland, 17 April 1852. The barque struck the reef and became a total wreck. Some of her boats washed away. A boat set out for the mainland to seek help, leaving survivors on the reef. After 14 days they were rescued by the whaler Lady Blackwood. The other boat eventually made Double Island Bay, but when the occupants set out overland for Moreton Bay they were tracked down by aborigines and all but the captain and one seaman were killed. When lost, Thomas King carried 3,500 pounds of specie and 8,000 pounds of gold dust. At the time of sailing it was reported that the gold aboard Thomas King consisted of 212 ounces owned by L. and S. Spyer and 220 ounces 8 penny weights 12 grains owned A. and M. Moses, giving a total weight of 432 ounces 8 penny weights 12 grains or 13.45 kg of gold.

All content from Kiddle encyclopedia articles (including the article images and facts) can be freely used under Attribution-ShareAlike license, unless stated otherwise. Cite this article:
Cato Reef Facts for Kids. Kiddle Encyclopedia.