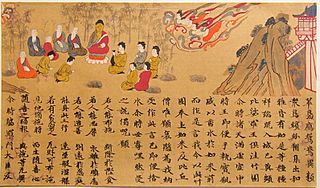 The Illustrated Sutra of Cause and Effect. An image done in the 8th century in Japan showing cause and effect. 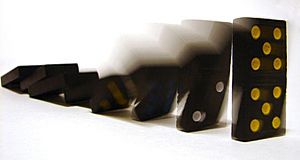 Causality is a way to describe how different events relate to one another. Suppose there are two events A and B. If B happens because A happened, then people say that A is the cause of B, or that B is the effect of A.

What looks very simple, is in fact a difficult problem. Many people have tried to solve it, they have come up with different solutions

Aristotle was an Greek philosopher. He also looked at the problem of causality. In his books Posterior analytics and Metaphysics he wrote:

This can be used to explain causality. Aristotle found different kinds of causes:

Aristotle told people of two types of causes: proper (prior) causes and accidental (chance) causes. Both types of causes, can be spoken as potential or as actual, particular or generic. The same language refers to the effects of causes; so that generic effects assigned to generic causes, particular effects to particular causes, and operating causes to actual effects. It is also essential that ontological causality does not suggest the temporal relation of before and after - between the cause and the effect; that spontaneity (in nature) and chance (in the sphere of moral actions) are among the causes of effects belonging to the efficient causation, and that no incidental, spontaneous, or chance cause can be prior to a proper, real, or underlying cause per se.

All investigations of causality coming later in history will consist in imposing a favorite hierarchy on the order (priority) of causes; such as "final > efficient > material > formal" (Aquinas), or in restricting all causality to the material and efficient causes or, to the efficient causality (deterministic or chance), or just to regular sequences and correlations of natural phenomena (the natural sciences describing how things happen rather than asking why they happen).

David Hume was another philosopher who looked at the relation between cause and effect. Hume thinks that there are certain things all such relations of cause and effect have in common.:

Hume says that if someone is used to always seeing the same things occur in the same order, he will get accustumed to them being in that order. When he sees one event occur, he will expect the other to occur as well:

Logic is the science that looks at how to build an argument. In Logic, there are usually two different types of causes. They are called necessary cause and sufficient cause.

All content from Kiddle encyclopedia articles (including the article images and facts) can be freely used under Attribution-ShareAlike license, unless stated otherwise. Cite this article:
Causality Facts for Kids. Kiddle Encyclopedia.