Cave-In-Rock is a village in Hardin County, Illinois, United States. Its principal feature and tourist attraction is nearby Cave-In-Rock, on the banks of the Ohio River. Cave-in-Rock was originally a stronghold for outlaws, including: river pirates and highwaymen Samuel Mason and James Ford, tavern owner/highwayman Isaiah L. Potts, bandits the Harpe Brothers, counterfeiters Philip Alston, Peter Alston, John Duff, Eson Bixby, and the Sturdivant Gang, and the post-Civil War bandit, Logan Belt. The population was 318 at the 2010 census.

There were 165 households out of which 28.5% had children under the age of 18 living with them, 44.8% were married couples living together, 10.3% had a female householder with no husband present, and 41.8% were non-families. 41.2% of all households were made up of individuals and 28.5% had someone living alone who was 65 years of age or older. The average household size was 2.10 and the average family size was 2.82. 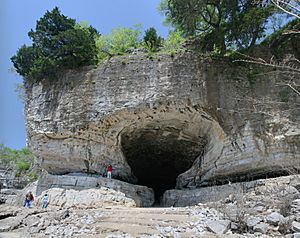 The cave at Cave-in-Rock State Park 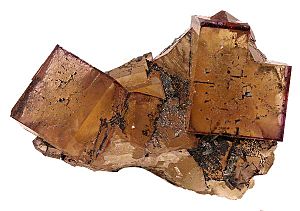 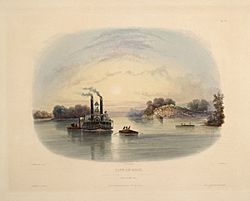 Cave-in-rock, view on the Ohio (circa 1832): aquatint by Karl Bodmer from the book "Maximilian, Prince of Wied’s Travels in the Interior of North America, during the years 1832–1834"

Town history to the present

The majority of Cave-In-Rock's earliest settlers were fugitive criminals on the run from civilized society. In the middle of the 1800, church services were being held in the cave. This earliest Christian congregation eventually formed the Big Creek Baptist Church; founded in 1807, it was the first church organized in southeastern Illinois. Cave-In-Rock incorporated in 1839, in the same year that Hardin County was created from a section of Pope County.

In Walt Disney's Davy Crockett and the River Pirates, Davy Crockett and Mike Fink anachronistically fight Sam Mason and his pirates. Also, at Walt Disney World's Magic Kingdom, there is a scene called "Cut-Throat Corner" and "Wilson’s Cave Inn" that can be seen on the bank of the Rivers of America while riding the Liberty Belle Riverboat around Tom Sawyer's Island. This scene is based upon the real life Cave-In-Rock and the activity of river pirates during that time period.

A scene of the MGM classic How the West Was Won was filmed at the cave as well as at Battery Rock. In 1997, The History Channel show In Search of History also, filmed at the site for an episode entitled "River Pirates".

The "ninth book" of Christopher Ward's 1932 novel The Strange Adventures of Jonathan Drew; A Rolling Stone is titled "Cave-In-Rock". The action is set in 1824. Jonathan rescues two slaves duped into running away and working for a gang of dangerous outlaws who use Cave-In-Rock as their base of operations.

L. A. Meyer's novel Mississippi Jack features the heroine leading an anachronistic raid against river pirates as a homage to the aforementioned Davy Crockett episode.

In 2009, Artist Greg Stimac photographed Cave in Rock's cave for his series of outlaw hideouts. In 2013, his photograph "Ancient Colony of Horse-Thieves, Counterfeiters and Robbers" was included in “The Seven Borders”, an exhibition curated by Joey Yates at the Kentucky Museum of Art and Craft.

All content from Kiddle encyclopedia articles (including the article images and facts) can be freely used under Attribution-ShareAlike license, unless stated otherwise. Cite this article:
Cave-In-Rock, Illinois Facts for Kids. Kiddle Encyclopedia.