Cefn Blaenau is a 23-hectare Site of Special Scientific Interest in a small upland valley in Carmarthen & Dinefwr, Wales. It was designated an SSSI in 1989 primarily for its flush and spring vegetation as well as the diverse mosaic of unimproved pasture, ‘ffridd’ land (steeply sloping land between enclosed fields and open hills, often dominated by bracken or gorse), marshy grassland, wet heath, acid grassland, broadleaved woodland, streams, and small rock outcrops. These habitats, which are well represented at this site, have been greatly reduced in north Carmarthenshire due to land improvement, agricultural intensification, and afforestation. Only about 140 hectares of flush and spring vegetation remain in the county. 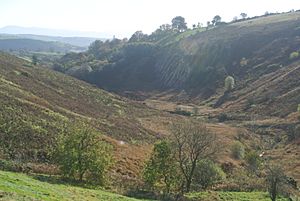 The headwaters of the River Marlais (a tributary of the Cothi) run through the valley. The valley bottom has a series of mires merging into areas of wet heathy pasture dominated by purple moor-grass (Molinia caerulea) and rich in sedges. In the very wet, flushed mire areas there is an abundance of bog-mosses (Sphagnum spp.) with other localized plants such as marsh St John’s-wort (Hypericum elodes), round-leaved sundew (Drosera rotundifolia), common butterwort (Pinguicula vulgaris), and bog pondweed (Potamogeton polygonifolius).

Four species of fritillary butterfly – marsh (Euphydryas aurinia), small pearl-bordered (Boloria selene), dark green (Speyeria aglaja), and silver-washed (Argynnis paphia) – have been noted. The marsh and small pearl-bordered fritillaries occur in the wet pastures, whilst the dark green is found on the drier bracken slopes and the silver-washed in the tree canopy. All have declined nationally and are local species, now principally of south-western Britain. Rare and also present is the brown hairstreak (Thecla betulae), while the small copper (Lycaena phlaeas) and green hairstreak (Callophrys rubi) are notably abundant.

The area is home to a good population of mustelids, such as badger, otter, weasel, stoat, polecat, and pine marten. Brown hares are also present.

The site is under private ownership and there is no public access, except with the permission of the owners.

All content from Kiddle encyclopedia articles (including the article images and facts) can be freely used under Attribution-ShareAlike license, unless stated otherwise. Cite this article:
Cefn Blaenau Facts for Kids. Kiddle Encyclopedia.