The Celebration Bowl is a postseason college football bowl game, first played in the 2015 season, contested between the champions of the Mid-Eastern Athletic Conference (MEAC) and the Southwestern Athletic Conference (SWAC) — the two prominent conferences of historically black colleges and universities (HBCUs) in NCAA Division I. It serves as the de facto national championship of black college football. The game is held annually on the third weekend of December. Starting with the December 2017 game, it is played at Atlanta's Mercedes-Benz Stadium; the first two games were played at the Georgia Dome. It is currently the only active bowl game to feature teams from the Football Championship Subdivision (FCS).

The game is organized by ESPN Events, which also runs the MEAC/SWAC Challenge, the annual interconference game between the two conferences, held over Labor Day weekend in Orlando, Florida. The Celebration Bowl was sponsored by the Air Force Reserve for three playings: 2015, 2016, and 2018. On December 9, 2020 Cricket Wireless signed on as title sponsor of the game which would be called the Cricket Celebration Bowl.

Due to the MEAC cancelling all fall athletics due to the COVID-19 pandemic, and the SWAC following suit postponing its football season to spring 2021, it was announced that the 2020 Celebration Bowl had been cancelled. 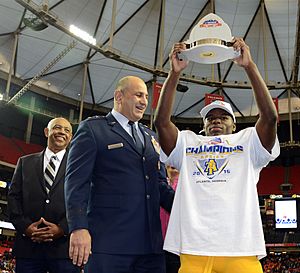 Tarik Cohen was the Offensive MVP of the 2015 game.

Through December 2019, there have been 5 games (10 total appearances).

Television and radio coverage of the bowl has included play-by-play announcers, color commentators, and sideline reporters.

All content from Kiddle encyclopedia articles (including the article images and facts) can be freely used under Attribution-ShareAlike license, unless stated otherwise. Cite this article:
Celebration Bowl Facts for Kids. Kiddle Encyclopedia.