Cenchrus agrimonioides is a rare species of grass in the family Poaceae that is endemic to the Hawaiian Islands. Its common names include Kāmanomano and agrimony sandbur. It was formerly distributed throughout the major islands but today it is nearly limited to Oʻahu. Kāmanomano inhabits dry to moist forests and lava plains. It is threatened by competition with non-native plants, predation by ungulates, and wildfire. When this plant became a federally listed endangered species of the United States in 1996 there were fewer than 100 individuals remaining. More recent counts revealed 181 wild individuals on Oʻahu and over 300 more which have been planted to augment the populations. This plant is nearly restricted to the island of Oʻahu, but there are a few individuals known on Maui. A few patches of the grass have been planted on Kahoʻolawe, as well. 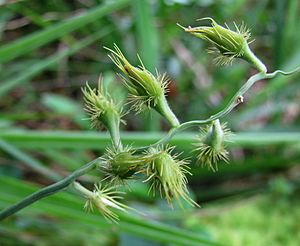 This is a perennial grass which produces is flowers and fruits within spiny burs. These burs attach to animals, which might then disperse the seeds.

All content from Kiddle encyclopedia articles (including the article images and facts) can be freely used under Attribution-ShareAlike license, unless stated otherwise. Cite this article:
Cenchrus agrimonioides Facts for Kids. Kiddle Encyclopedia.