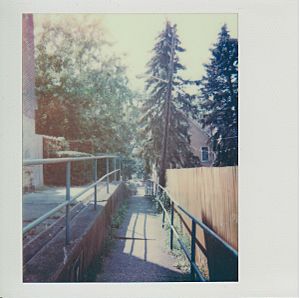 While the Central Lawrenceville neighborhood only has one distinct flight of city steps - it's an essential one for connecting residents to two popular amenities. In Central Lawrenceville, the Government Way Steps of Pittsburgh provides easy access between the Carnegie Public Library Lawrenceville branch and Arsenal Park. These sidewalk steps provide a safe passage for walkers of all ages.

All content from Kiddle encyclopedia articles (including the article images and facts) can be freely used under Attribution-ShareAlike license, unless stated otherwise. Cite this article:
Central Lawrenceville (Pittsburgh) Facts for Kids. Kiddle Encyclopedia.