The Allegheny Arsenal, established in 1814, was an important supply and manufacturing center for the Union Army during the American Civil War, and the site of the single largest civilian disaster during the war.

Today, the site is the location of the nine-acre Arsenal Park in the Central Lawrenceville neighborhood of Pittsburgh, Pennsylvania.

In 2012, officials from the Pittsburgh History & Landmarks Foundation began drawing attention to the deteriorating arsenal structures.

The Arsenal was established by the U.S. Army Ordnance Department near Pittsburgh in 1814. It was situated on 30 acres (12 ha) of land bordering the Allegheny River in the community of Lawrenceville.

The arsenal served as a supply and manufacturing center for the troops in the west. Its peak years came during the Civil War, especially when the manufacture of cartridges, became a high priority. Civilian employment at the arsenal increased from a pre-war total of 308 to over 1100 workers. One of the busiest facilities was the main lab, which employed 158 workers, the majority of whom were women engaged in the making of cartridges.

On Wednesday, September 17, 1862, around 2 pm, the arsenal exploded. The explosion shattered windows in the surrounding community and was heard in Pittsburgh, over two miles (3 km) away. At the sound of the first explosion, Col. John Symington, Commander of the Arsenal, rushed from his quarters and made his way up the hillside to the lab. As he approached, he heard the sound of a second explosion, followed by a third. Fire fighting equipment as well as a bucket brigade tried to douse the flames with water. The volunteer fire company from Pittsburgh arrived and assisted in bringing the fire under control.

By the time the fire was put out, the lab had been reduced to a pile of smoldering rubble. 78 workers, mostly young women, were killed. 54 bodies were unidentified, and were buried in a mass grave in the nearby Allegheny Cemetery. Among those killed were 15-year-old munitions assembler Catherine Burkhart, who lived at 184 38th Street, and 17-year-old Margaret Turney, who lived at 160 43rd Street.

The most commonly held view of the cause of the explosion was that the metal shoe of a horse had struck a spark which touched off loose powder in the roadway near the lab, which then traveled up onto the porch where it set off several barrels of gunpowder. A coroner's jury held that the accident had been the result of the negligent conduct of Col. John Symington and his subordinates in allowing loose powder to accumulate on the roadway and elsewhere. However, during a subsequent military inquiry into the conduct of Col. Symington, many of the same witnesses who had appeared before the coroner changed their testimony. There were so many discrepancies between the two hearings that most of the commonly held views of the explosion have been shown to be thoroughly discredited. In the end Col. Symington was found innocent of any wrongdoing by the army, and the court concluded that "the cause of the explosion could not be satisfactorily ascertained...."

Col. Symington, in a letter to the Ordnance Department two days after the explosion, speculated that it had been caused "by the leaking out of powder when one of the barrels was being placed on the platform." In fact the problem of leaking barrels seemed to be the one point of agreement among all the witnesses. Alexander McBride, the Superintendent of the Lab, had repeatedly complained that the powder shipped by Dupont and Company was delivered in defective barrels with loose covers. Symington was suspicious that the "parties shipping powder may have used barrels more than once for the shipment of powder, as the barrels have been returned to them at their request." But in the end, the final word still belongs to the Army inquiry and the exact cause remains unknown. Symington himself was sent on retirement the next year. 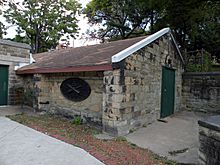 The explosion at the Arsenal was overshadowed by the Battle of Antietam, which occurred on the same day near the town of Sharpsburg, Maryland. Work at the Arsenal continued, and a new lab was constructed by the following year. After the war, the Allegheny Arsenal served primarily as a storage facility for the Ordnance Department and Quartermaster Corps. In the 1900s most of the land was sold off. Today the site of the explosion is in a ballfield in Arsenal Park. Nearby is the powder magazine, now a maintenance shed for the park.

All content from Kiddle encyclopedia articles (including the article images and facts) can be freely used under Attribution-ShareAlike license, unless stated otherwise. Cite this article:
Allegheny Arsenal Facts for Kids. Kiddle Encyclopedia.