Central Plaza is a 78-storey, 374 m (1,227 ft) skyscraper completed in August 1992 at 18 Harbour Road, in Wan Chai on Hong Kong Island in Hong Kong. It is the third tallest tower in the city after 2 International Finance Centre in Central and the ICC in West Kowloon. It was the tallest building in Asia from 1992 to 1996, until the Shun Hing Square in neighbouring Shenzhen was built. Central Plaza surpassed the Bank of China Tower as the tallest building in Hong Kong until the completion of 2 IFC.

Central Plaza was also the tallest reinforced concrete building in the world, until it was surpassed by CITIC Plaza, Guangzhou. The building uses a triangular floor plan. On the top of the tower is a four-bar neon clock that indicates the time by displaying different colours for 15-minute periods, blinking at the change of the quarter.

An anemometer is installed on the tip of the building's mast, at 378 metres (1,240 ft) above sea level. The mast has a height of 102 m (335 ft). It also houses the world's highest church inside a skyscraper, Sky City Church. 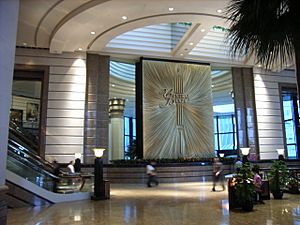 Central Plaza is made up of two principal components: a free standing 368-metre-high (1,207 ft) office tower and a 30.5-metre-high (100 ft) podium block attached to it. The tower is made up of three sections: a 30.5-metre-high (100 ft) tower base forming the main entrance and public circulation spaces; a 235.4-metre-tall (772 ft) tower body containing 57 office floors, a sky lobby and five mechanical plant floors; and the tower top consist of six mechanical plant floors and a 102-metre-tall (335 ft) tower mast.

The ground level public area along with the public sitting out area form an 8,400 m2 (90,000 sq ft) landscaped garden with fountain, trees and artificial stone paving. No commercial element is included in the podium. The first level is a public thoroughfare for three pedestrian bridges linking the Mass Transit Railway, the Convention and Exhibition Centre and the China Resource Building. By turning these space to public use, the building got 20% plot ratio more as bonus. The shape of the tower is not truly triangular but with its three corners cut off to provide better internal office spaces.

All content from Kiddle encyclopedia articles (including the article images and facts) can be freely used under Attribution-ShareAlike license, unless stated otherwise. Cite this article:
Central Plaza Facts for Kids. Kiddle Encyclopedia.