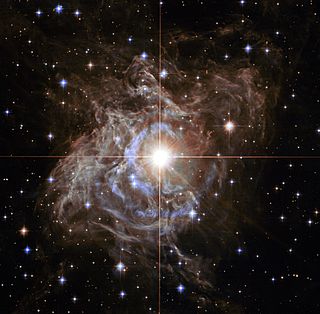 RS Puppis. It is one of the brightest known Cepheid variable stars in the Milky Way galaxy; image, Hubble Space Telescope

Cepheids are a type of very luminous variable stars. There is a strong direct relationship between a Cepheid's luminosity and pulsation period. This makes Cepheids important standard candles for the galactic and extragalactic distance scales.

The first cepheid known was Delta Cephei in the constellation Cepheus, found by John Goodricke in 1784. Delta Cephei is of great importance because its distance is extremely well known, thanks in part to it being in a star cluster, and the precise Hubble Space Telescope/Hipparcos parallaxes.

Classical Cepheids (also known as Population I Cepheids, Type I Cepheids, or Delta Cephei variables) pulsate with very regular periods of the order of days to months. Classical Cepheids are population I young variable stars which are 4–20 times more massive than the Sun, and up to 100,000 times more luminous. Cepheids are yellow supergiants of spectral class F6 – K2. When they pulsate, their radii change by ~25%. For the longer-period I Carinae this means millions of kilometers for a pulsation cycle.

Type II Cepheids are used to fix the distance to the galactic center of the Milky Way, globular clusters, and galaxies.

A group of pulsating stars on the instability strip have periods of less than 2 days, similar to RR Lyrae variables but with higher luminosities. Anomalous Cepheid variables have masses higher than type II Cepheids, RR Lyrae variables, and our sun. It is unclear whether they are young stars on a "turned-back" horizontal branch, blue stragglers formed through mass transfer in binary systems, or a mix of both.

A small proportion of Cepheid variables have been observed to pulsate in two modes at the same time, usually the fundamental and first overtone, occasionally the second overtone. A very small number pulsate in three modes, or an unusual combination of modes including higher overtones.

All content from Kiddle encyclopedia articles (including the article images and facts) can be freely used under Attribution-ShareAlike license, unless stated otherwise. Cite this article:
Cepheid variable Facts for Kids. Kiddle Encyclopedia.