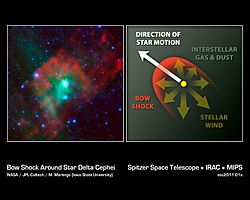 Delta Cephei (δ Cep, δ Cephei) is a binary star system about 887 light-years away in the northern constellation of Cepheus, the King. At this distance, the apparent magnitude of the star is reduced by 0.23 as a result of gas and dust along the line of sight.

Delta Cephei, found by John Goodricke in 1784, was only the second Cepheid variable discovered. It is very important because its distance is extremely well known. This is partly because it is in a star cluster, close enough for the precise Hubble Space Telescope/Hipparcos parallaxes to give a good result. As a result, it is known as a "fundamental distance calibrator", or absolute candle. Delta Cephei is a classical, or type I, Cepheid variable.

The only Cepheid variable closer to us is Polaris, the North Star, whose distance is still not exactly known.

Delta Cephei is emitting around 2,000 times the Sun's luminosity. This is producing a strong stellar wind, which, with the pulsations and shocks in the star's atmosphere, is ejecting mass at the rate of (1.0 ± 0.8) × 10–6 solar masses per year. This is the equivalent to the mass of the Sun roughly every million years. The matter is flowing outward at a velocity of about 35 km s–1. This expelled gas forms a nebula about one parsec across, centered on Delta Cephei, and contains 0.07–0.21 solar masses of neutral hydrogen. A bow shock is being formed where the stellar wind is colliding with the surrounding interstellar medium.

All content from Kiddle encyclopedia articles (including the article images and facts) can be freely used under Attribution-ShareAlike license, unless stated otherwise. Cite this article:
Delta Cephei Facts for Kids. Kiddle Encyclopedia.