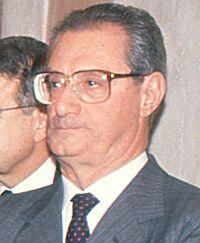 Cesare Romiti (24 June 1923 – 18 August 2020) was an Italian economist and businessman. He was born in Rome. He was best known as an executive of both state-owned firms and private companies, including Fiat and Alitalia.

In April 1997, Romiti was convicted tax fraud, and making illegal payments to political parties. In 2000, the Supreme Court commuted the sentence to eleven months and ten days, for the same charges. In December 2003, the Court of Appeal in Turin, revoked the sentence for false accounting.

All content from Kiddle encyclopedia articles (including the article images and facts) can be freely used under Attribution-ShareAlike license, unless stated otherwise. Cite this article:
Cesare Romiti Facts for Kids. Kiddle Encyclopedia.