Opened on January 11, 1967, the Château Champlain was constructed by CP Hotels to accommodate the crowds visiting Expo 67. At the time it was the tallest hotel in Canada. Canadian Pacific Railways chairman Buck Crump proposed naming the hotel after the explorer and founder of Quebec City and New France, Samuel de Champlain. Canadian Pacific sold the hotel in 1995, and it joined the Marriott hotel chain. In 2018 the hotel was purchased by the Tidan Hospitality and Real Estate Group for $65 million. 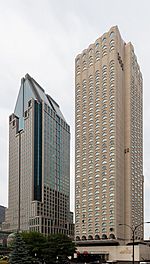 View of Château Champlain next to 1000 de La Gauchetière.

The hotel stands 139 metres (456 ft) high with 40 floors and was designed by Quebec architects Roger D'Astous and Jean-Paul Pothier. The arch-shaped windows were intended by the designers to complement the Romanesque Revival arches of nearby Windsor Station, another Canadian Pacific property. D'Astous was a student of Frank Lloyd Wright, and the Château Champlain's arches have also been cited as similar to those used on Wright's last commission, the Marin County Civic Center. However, the arched openings have led some to nickname the building the "cheese grater".

The Château Champlain has 596 guest rooms and 19 suites along with a health and fitness centre with cardiovascular and weight lifting equipment. 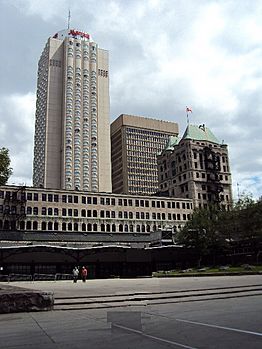 All content from Kiddle encyclopedia articles (including the article images and facts) can be freely used under Attribution-ShareAlike license, unless stated otherwise. Cite this article:
Château Champlain Facts for Kids. Kiddle Encyclopedia.