Kids Encyclopedia Facts
This page is about the historic Windsor Station. For the modern-use station nearby, see Lucien-L'Allier station (Exo). For the railway station in Windsor, Ontario, see Windsor station (Ontario).

Windsor Station (French: Gare Windsor) is a former railway station in Montreal, Quebec, Canada. It used to be the city's Canadian Pacific Railway (CPR) station, and served as the headquarters of CPR from 1889 to 1996. It is bordered by Avenue des Canadiens-de-Montréal to the north, Peel Street to the east, Saint Antoine Street to the south and the Bell Centre to the west.

The walls are gray limestone from a quarry in Montreal. Outside, the columns reach up to 7 feet (2.1 m) wide. 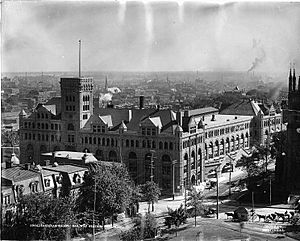 In 1887, the Canadian Pacific Railway (CPR) began to build a railway station in Montreal, which would serve as its headquarters, three years after the completion of the Dalhousie Station in 1884. The Windsor Station project was entrusted to New York City architect Bruce Price, who chose a Romanesque Revival style for the building. Price had to submit four versions of his plans to satisfy the treasurer of CPR, before the project was accepted. It was constructed at a cost of $300,000 CAD, and the first trains departed February 4, 1889. It was known as the Windsor Street Station, named for the street on which it was located, Windsor Street (today Peel Street).

It was expanded for the first time from 1900 to 1903, and again from 1910 to 1913 by Canadian architects. The third expansion, in 1916, included a fifteen-storey tower which dramatically altered Montreal's skyline. The project was entrusted to the firm of brothers Edward and William Maxwell. 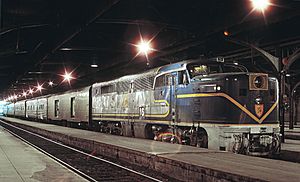 The Delaware and Hudson's Montreal Limited at Windsor Station on August 27, 1970

In July 1970, CPR announced its plans to demolish Windsor Station and build a 60-storey office building on the site. The building, which was going to cost C$250 million, was to be designed by the same architects as New York City's World Trade Center. After several delays the project was abandoned.

Via Rail was created in 1978 and took over the responsibility for operating intercity passenger trains of both Canadian National CN and CPR. During Via's first months there was no operational change for CPR or CN trains, as they used their respective crews, routes, equipment and stations. However, by the summer of 1979, the integration process began, and most of Via's former CP trains that used Windsor Station were consolidated at CN's Central Station, including CP's former transcontinental passenger services such as The Atlantic Limited and The Canadian, both of which were also renamed to be bilingually appropriate. Via Dayliners (Budd Rail Diesel Cars) operating between Windsor Station and St. Sacrement station in Quebec City via the CP route north of the St. Lawrence River continued to use Windsor Station until 1984. Amtrak's daily Montreal-New York City train (the Adirondack) continued to use Windsor Station until 1986. Both the dayliners and the Adirondack were switched to Central Station. Local services to Ottawa via Montebello and to Mont-Laurier, both of which had been transferred from CPR to Via, continued to use Windsor Station until they were cancelled in 1981. 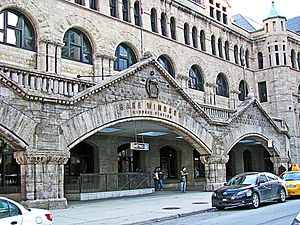 Entrance to Windsor Station in 2008

After intercity passenger service was removed, Windsor Station continued to be a commuter rail terminal for the STCUM's (now the RTM's) Montréal/Dorion-Rigaud suburban train (now Vaudreuil-Hudson line). In 1999, service to Blainville (now Saint-Jérôme line) was added, and in 2001, service to Delson (now Candiac line).

In 1993, construction began on the Molson Centre (now Bell Centre), a hockey arena to replace the Montreal Forum. The arena site was located immediately west of Windsor Station on the trackage which served the station platforms, resulting in the historic station being severed from the rail network. The Molson Centre opened its doors on March 16, 1996, and the new Lucien-L'Allier Station was opened at the western end of the arena structure to replace the now-closed suburban train terminal at Windsor Station. Until 2001, the new train station was called Terminus Windsor, but this was changed to reduce confusion with the original station building and to indicate a link to the Lucien-L'Allier metro (subway) station which is below the station building. It is still possible to walk through the Bell Centre to connect with Windsor Station and the Lucien L'Allier metro station.

Windsor Station also housed the headquarters of CPR and its parent company Canadian Pacific Limited until after a corporate restructuring in the mid-1990s, the railway abandoned or sold most of its trackage east of Montreal, and it focused its activities in Western Canada. In 1996, CP moved its headquarters to Gulf Canada Square in Calgary. 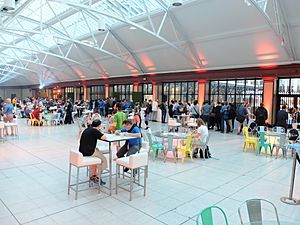 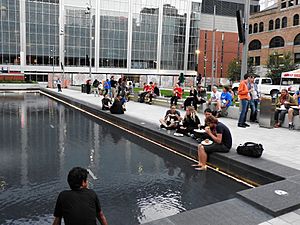 Since 1993, the structure is no longer connected to the rail network. It was sold by CP to Cadillac Fairview in 2009 (thus removing it from the jurisdiction of the Heritage Railway Stations Act; consequently, it was classified as a provincial heritage site that same year).

Also located in the station is the Canadian Railway Office of Arbitration.

The rest of Windsor Station has been redeveloped into an office complex and houses some restaurants and cafés. The interior concourse, which is open to the public, can be rented for private and public events. The lower floor is part of the RÉSO and connects the Bonaventure metro station with the Lucien-L'Allier commuter rail station as well as the Bell Centre. The 13 terminal tracks running into Windsor Station and the overhead canopy have been removed, and replaced by a public square.

All content from Kiddle encyclopedia articles (including the article images and facts) can be freely used under Attribution-ShareAlike license, unless stated otherwise. Cite this article:
Windsor Station (Montreal) Facts for Kids. Kiddle Encyclopedia.