Chía is a small town in the eastern Pyrenees, in Aragon, Spain; it is a municipality in the Huesca province.

People in this region speak patués, a dialect of the eastern Aragonese language. 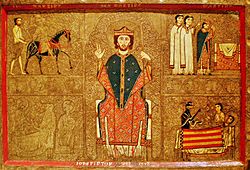 Frontal part of the altar of the San Martín de Chía church, from the 13th century. Now in the National Museum of Art of Catalonia, Barcelona.

Chía is in the Benasque Valley, on the foot of the Sierra de Chía, a short mountain range in the Pyrenees. It is about 114 km (70.8 mi) from Huesca, the capital city of the Huesca province.

All content from Kiddle encyclopedia articles (including the article images and facts) can be freely used under Attribution-ShareAlike license, unless stated otherwise. Cite this article:
Chía, Aragon Facts for Kids. Kiddle Encyclopedia.