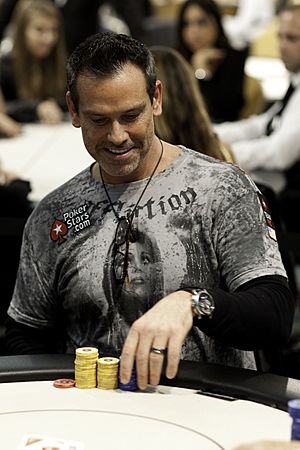 Chad Lewis Brown (August 13, 1961 – July 2, 2014) was an American actor, poker player and color commentator. He was sponsored by PokerStars. He co-hosted the NBC television series Caesars Challenge during the early 1990s.

Brown was born Manhattan, New York City and was raised in the Bronx. He lived in the Los Angeles, California. He married French-American poker player Vanessa Rousso. They separated in early 2012.

In February 2011, Rousso reported on her Twitter account that Brown had a ten-pound malignant tumor removed from his abdomen. This was a rare form of sarcoma called liposarcoma. He died from liposarcoma on July 2, 2014 in New York City, aged 52.

All content from Kiddle encyclopedia articles (including the article images and facts) can be freely used under Attribution-ShareAlike license, unless stated otherwise. Cite this article:
Chad Brown (poker player) Facts for Kids. Kiddle Encyclopedia.