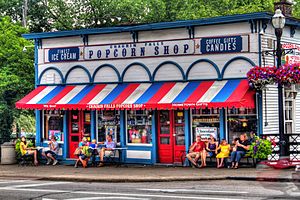 The Chagrin Falls Popcorn Shop in 2010

The Chagrin Falls Popcorn Shop, established in 1875, is a popcorn and candy shop located in the village of Chagrin Falls, Cuyahoga County, Ohio. It was originally established as a retail showcase for The Pride of the Falls flour mill, which was powered by the Chagrin River. The store opened a second location at Shaker Square in 2005.

On a stop during his re-election campaign, President George W. Bush visited the Popcorn Shop on September 4, 2004. First lady Laura Bush joined the president for ice cream and purchased several cans of popcorn. Jenna and Barbara Bush accompanied them.

All content from Kiddle encyclopedia articles (including the article images and facts) can be freely used under Attribution-ShareAlike license, unless stated otherwise. Cite this article:
Chagrin Falls Popcorn Shop Facts for Kids. Kiddle Encyclopedia.