After her father's presidency, Hager became an author, serves as an editor for Southern Living magazine, and also a television personality on NBC, being featured most prominently as a member of The Today Show as a correspondent. She is also a frequent guest co-host of the fourth hour of the show (Kathie Lee & Hoda). 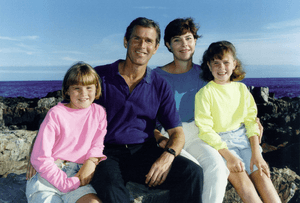 Jenna (left) and Barbara Bush with their parents

Hager was born at Baylor University Medical Center in Dallas, Texas. While living in Dallas, she and her sister attended Preston Hollow Elementary School and then The Hockaday School. In 1994, after her father was elected Governor of Texas and the family moved to Austin, Texas, Bush was a student at St. Andrew's Episcopal School, and attended Austin High School from 1996 until her graduation in 2000. With her father becoming President in 2001, she attended the University of Texas at Austin and took summer classes at New York University. 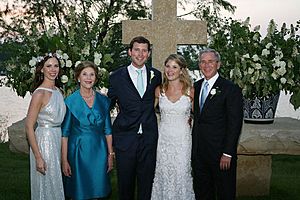 Barbara Bush (left), Laura Bush, newlyweds Henry and Jenna Hager, and George W. Bush shortly after the wedding ceremony on May 10, 2008, at the Prairie Chapel Ranch near Crawford, Texas

After meeting during her father's 2004 presidential campaign, Bush and Henry Chase Hager (born May 9, 1978) became engaged in August 2007. Before proposing, Hager asked President Bush for permission to marry his daughter. Their relationship became public when the two appeared together at a White House dinner for The Prince of Wales and The Duchess of Cornwall in November 2005. The wedding took place during a private ceremony on May 10, 2008, at her parents' Prairie Chapel Ranch near Crawford, Texas.

Hager also serves on the board of the Greenwich International Film Festival.

Unlike most of her relatives, Hager is not a member of the Republican Party. While registering to vote in New York, she mistakenly registered with the Independence Party of New York while meaning to declare herself a nonpartisan. In 2010, Jenna Bush Hager and Barbara Bush told People that they preferred not to identify with any political party, stating, "We're both very independent thinkers."

All content from Kiddle encyclopedia articles (including the article images and facts) can be freely used under Attribution-ShareAlike license, unless stated otherwise. Cite this article:
Jenna Bush Hager Facts for Kids. Kiddle Encyclopedia.