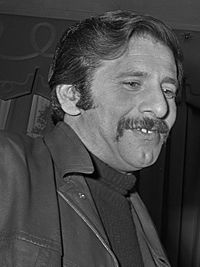 Chaim Topol (Hebrew: חיים טופול; born September 9, 1935), sometimes known as Topol, is an Israeli theatrical and movie performer, actor, writer and producer. Topol is known for his role as Tevye the milkman in the 1971 movie Fiddler on the Roof. He has been nominated for an Oscar and a Tony Award. He has won two Golden Globes Awards.

Some of Topol's other notable movie appearances were the title role in Galileo (1975), Dr. Hans Zarkov in Flash Gordon (1980), and as Milos Columbo in the James Bond movie For Your Eyes Only (1981).

Topol is married to Galia Topol. He retired from acting in 1998 and now only appears on stage.

All content from Kiddle encyclopedia articles (including the article images and facts) can be freely used under Attribution-ShareAlike license, unless stated otherwise. Cite this article:
Chaim Topol Facts for Kids. Kiddle Encyclopedia.