Chamaesipho tasmanica is an intertidal shoreline barnacle of Australia. Its principal range centers in New South Wales, and Tasmania. Columnar colonies can be found on high intertidal rocks relatively free of dense seaweed. Individuals are small, less than 15 mm, and grayish in color. 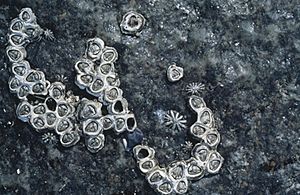 The scutum possesses a clear rounded adductor ridge, best developed of all species of Chamaesipho. Articular ridge is large, rounded, with deep articular furrow. The tergum is higher than the other two species, with a broad distinct articular furrow, and 3-7 tergal depressor crests, and no tergal spur. Card setae are present only on anterior rami of cirrus I and cirrus II.

Locally, this species is called the honeycomb barnacle, from its appearance in crowded colonies.

The natural range of Chamaesipho tasmanica is restricted to Australian waters, principally New South Wales and Tasmania. Northernmost reported locality is Cape Byron in northern New South Wales. West of Tasmania, it is known as far as Point Sinclair in Great Australian Bight. The species has been noted once at Lord Howe Island.

Chamaesipho tasmanica is found on rocks in high intertidal zone in exposed areas. It will not settle on other substrates, and will not colonize sheltered areas. C. tasmanica is subject to whelk predation, so will avoid seaweed covered locations which give shelter to whelks.

All content from Kiddle encyclopedia articles (including the article images and facts) can be freely used under Attribution-ShareAlike license, unless stated otherwise. Cite this article:
Chamaesipho tasmanica Facts for Kids. Kiddle Encyclopedia.