Kids Encyclopedia Facts
Not to be confused with Lake Champlain and Champlain Valley in the US states of Vermont and New York and extending slightly into Quebec, Canada.

The Champlain River is 66.7 km long flowing on the north shore of St. Lawrence river. This river flows between Saint-Maurice River and the Batiscan River watershed, in Les Chenaux Regional County Municipality, in administrative region of Mauricie, in the province of Quebec, Canada. 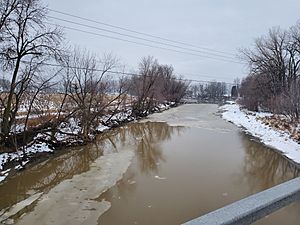 Champlain River is flowing almost at the boundary between the manors of Batiscan and Champlain. Champlain river flows from north to south to empty in the St. Lawrence river at Champlain village. Champlain River rises at an altitude of about 130 meters in wetlands located at the foot of the moraine of Saint-Narcisse. Its watershed through the municipalities of Notre-Dame-du-Mont-Carmel, Trois-Rivières (Saint-Louis-de-France area), Saint-Maurice, Saint-Narcisse, Saint-Luc-de-Vincennes, Sainte-Geneviève-de-Batiscan, Batiscan and Champlain, all located, with the exception of Trois-Rivières, in the Les Chenaux Regional County Municipality.

Champlain river divides into four distinct branches that connect to the main branch. It is characterized by the presence of several meanders, a number of which are abandoned along the river near its mouth. The geographical coordinates of the mouth of the river are: -72.28194 West, 46.44695 North.

The banks of the Champlain River are composed of marine clays, a variety that is very unstable compared to other types of clay, favoring landslides when water accumulates in the clay soil.

History of landslides in Saint-Luc-de-Vincennes]:

A major landslide occurred on the night of November 9 to 10, 2016, on a lot of land belonging to Luc Normandin, in the Saint-Joseph-Ouest range, within the limits of Saint-Luc-de-Vincennes. The field started to move around 9.30 pm on November 9. The slip site is approximately one kilometer from the 1986 slip site, which was twice as large as the one in 2016.

The slip stopped at about ten meters from the house of Luc Normandin and its barn sheltering about sixty cattle. This natural disaster generated a large crater of the size of a baseball field, about 160 meters wide and a depth of between 2 and 10 meters, between farm buildings and the edge of the Champlain River.

Thousands of tons of clay and earth slipped into the river bed completely blocking the flow of water over several tens of meters. The water has risen to make its way again.

Two houses were evacuated and a 200-meter security perimeter was established around the crater.

The toponym "Champlain River" was officialized in the registry of places name at the Commission de toponymie du Québec as of December 5, 1968.

In 1863, Stanislas Drapeau Champlain wrote that "Champlain river has enough water power in order to activate flour mills and saws, and the large tannery of Mr. Richardson, living in Quebec".

About 1800, Mathew Bell built a mill having 32 saws. Burned in 1850, it was replaced by a saw mill counting 20 saws and a tannery belonging to L. Osborne Richardson. The tannery was moved to the Eastern Townships in 1875.

All content from Kiddle encyclopedia articles (including the article images and facts) can be freely used under Attribution-ShareAlike license, unless stated otherwise. Cite this article:
Champlain River Facts for Kids. Kiddle Encyclopedia.