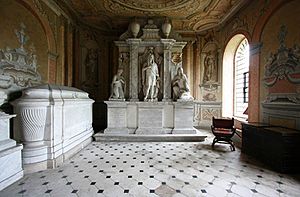 The Chandos Mausoleum is an early 18th-century English Baroque building by James Gibbs in the care of the Churches Conservation Trust. The mausoleum is attached to the north side of the church of St Lawrence Whitchurch in the London Borough of Harrow, England. The church including the mausoleum is recorded in the National Heritage List for England as a designated Grade I listed building.

The mausoleum was intended as the final resting place of the Dukes of Chandos. The church and mausoleum are sited at the southeast corner of Canons Park which was an estate acquired by James Brydges, later 1st Duke of Chandos. Brydges rebuilt the house on the estate, Cannons, employing Gibbs as one of his architects. Brydges also rebuilt the church, which was a medieval building, to a design by John James. The church reopened in 1716, and originally had a chapel for family monuments. The mausoleum was added in 1735, the year Brydges' second wife died.

Like the church itself, the interior of the mausoleum is decorated with wall-paintings which feature trompe-l'œil effects. The ceiling is painted with a miniature copy of the dome of the Pantheon, Rome. The style is Rococo and generally playful, although skulls are depicted. The artist for the mausoleum was Gaetano Brunetti. Some sources say Francesco Sleter was also involved.

The mausoleum contains memorials to members of the Chandos family. On the west wall is a sculptured monument to the 1st Duke which originally stood in the church. It was commissioned from Grinling Gibbons, although Pevsner is sceptical about the extent to which it was executed by Gibbons rather than his workshop. The Duke is shown in a wig dressed as a Roman citizen. This figure is flanked by plain pilasters outside which are the kneeling figures of two of his wives, Mary Lake and Cassandra Willoughby.

All content from Kiddle encyclopedia articles (including the article images and facts) can be freely used under Attribution-ShareAlike license, unless stated otherwise. Cite this article:
Chandos Mausoleum Facts for Kids. Kiddle Encyclopedia.