Channing is a city in Hartley County, Texas, in the United States. It is the county seat of Hartley County. As of the 2010 census, the city population was 363. 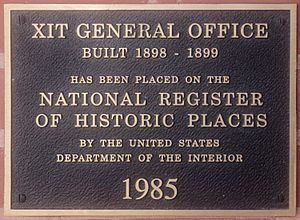 The XIT Ranch office is listed on the National Register of Historic Places.

Channing was founded in 1888 by George Channing Rivers, a paymaster for the Fort Worth and Denver City Railway. The settlement was originally called Rivers. Since the name Rivers duplicated another community in Texas, the name was changed to Channing later that year. Channing developed directly from its association with the XIT Ranch, a property that once included land in as many as ten counties in the Texas Panhandle. In 1891, Willis D. Twitchell platted Channing's business district. At that time, Channing was the headquarters of the XIT. Albert Boyce, the ranch's general manager and one of the most prominent early citizens, built the first house in the community. By 1900, Channing had two stores, a post office, lumber yard, and school. Two elections, one in November 1896 and the other in 1903, were required for Channing to replace Hartley as county seat. The frame courthouse was pulled to Channing on wheels by mounted XIT cowboys in 1903. A brick courthouse was completed in 1906 and the original courthouse was converted into the once famous Hotel Rivers. One of the first public libraries in the Panhandle was established in 1908 by a local women's club. The estimated population at this time was about 600.

The XIT, which conducted most of its business from Channing, was the town's chief customer until liquidation of the ranch in 1911. The local economy was severely impacted, although the real estate market temporarily thrived from the sale of XIT lands. A fire swept through the business district on September 6, 1931, destroying seven buildings including Hotel Rivers. By 1940, Channing had an estimated population of 475 with several businesses, a high school, and three churches. A restored XIT office building is located in Channing as a museum.

City government consists of a mayor and two city council members. Mayor Karen Schulz was elected to fill a vacancy in May 2009. Current council members are Ms. Janie Ray and Ms. Betty Edwards.

Law enforcement is provided by the Hartley County Sheriff's Office as the City does not have a police force of its own. Fire protection for the City, and much of southern Hartley County is provided by an all volunteer fire department, headquartered in the City. Fire Chief as of October 2009 was Jeremy Tunnell.

As of October 2009 there were a limited number of businesses operating in the City, a cafe, mercantile and a rendering plant. Most citizens were either involved in ranching, dairy or other agricultural professions, or were employed in businesses in surrounding communities.

According to the Köppen Climate Classification system, Channing has a semi-arid climate, abbreviated "BSk" on climate maps.

There were 135 households out of which 38.5% had children under the age of 18 living with them, 74.1% were married couples living together, 2.2% had a female householder with no husband present, and 23.0% were non-families. 23.0% of all households were made up of individuals and 11.9% had someone living alone who was 65 years of age or older. The average household size was 2.63 and the average family size was 3.07.

All content from Kiddle encyclopedia articles (including the article images and facts) can be freely used under Attribution-ShareAlike license, unless stated otherwise. Cite this article:
Channing, Texas Facts for Kids. Kiddle Encyclopedia.