Chapman's Pool is a small cove to the west of Worth Matravers on the Isle of Purbeck, in Dorset, England.

The rocks that form the cove are the upper parts of the Kimmeridge Clay, and are rich in fossils, especially bivalves and ammonites. Most of these fossils are flattened, but three-dimensional examples are preserved in the "Rotunda Nodules", including the age-marker ammonite, the coarse-ribbed Pavlovia rotunda.

Although manganese oxide nodules are seen, these are not local but from the cargo of the SSTreveal wrecked on the Kimmeridge Ledges below Hounstout on 10 January 1920. 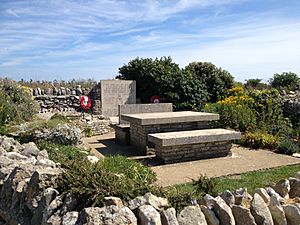 The Royal Marines Association memorial garden at Emmetts Hill was initiated following the IRA attack on the Royal Marines Barracks at Deal, home and training centre for the Royal Marines Band Service, in September 1989. The originator and organiser for the project was Colin Dishington, a member of the Dorset Branch of the RMA, since renamed the Poole and District Branch. A suitable site was chosen on an exposed headland looking out over the wild seas of Kimmeridge Bay with a view down to Chapman's Pool and along the rugged Jurassic coastline to Portland. The site also overlooks a training area used by the Royal Marines both during World War II and since; in addition, it fitted the beauty and tranquility required for the memorial location. The land, which is within the boundary of the Enscombe estate, was freely given by the then owner, David Scott (Lt Col ret'd), and right of access to the site is written into the deeds of the tenant farmer. It was decided to add to the initial Deal inscription to remember Royal Marines lost in all the conflicts from 1945-1990. As well as bearing the Corps' crest, the original stone also bears a message to passing walkers and those that come to pay their respects:

Rest awhile and reflect that we who are living can enjoy the beauty of the sea and countryside.

In 2005 a new stone was added to commemorate ongoing losses of Royal Marines in current conflicts over more recent years. A service of dedication was conducted by the Rev. W. Aires, with the stone unveiled by Maj.-Gen. F. C. Barton, CB CBE RM, on 19 August 2006. Each year since the unveiling, a service has been conducted by the RMA at the memorial. The calls are sounded by a serving RM bugler from the RM Band Service. Details of the monument are registered with the Imperial War Museum's Monument section and local guides give reference to it. Access to the site is by footpath from the car park at Renscombe Farm. The original three-bar wooden rail fence has been replaced by a Purbeck stone wall to blend in with the stone walls of the area, and gives better protection to the garden, which is maintained by volunteers from the Poole and District RMA. As the site is on the main coastal path many people pause to reflect at the memorial, or use it as a resting point on their walk to enjoy the views. The ashes of RMA members have also been scattered in the monument gardens, and the families of those lost and resting elsewhere often visit the site, a truly peaceful and fitting memorial to the members of the Royal Marines family who have given their lives since WW2.

In 1866, after much local pressure and because many lives were lost at sea nearby, the decision was made to build a lifeboat station at Chapman's Pool. The station was built and completed during 1867. The lifeboat George Scott was placed at Chapman's Pool in November 1866 but the station soon closed again in 1880 owing to the great expense involved in up keeping the boathouse, the landslips that constantly swept down upon it and, lacking a village nearby, the dearth of local volunteers to serve on the lifeboat. The building still stands and is used as a fishing hut.

All content from Kiddle encyclopedia articles (including the article images and facts) can be freely used under Attribution-ShareAlike license, unless stated otherwise. Cite this article:
Chapman's Pool Facts for Kids. Kiddle Encyclopedia.