Characidae, the characids or characins is a family of freshwater subtropical and tropical fish, belonging to the order Characiformes. The name "characins" is the historical one, but scientists today tend to prefer "characids" to reflect their status as a by and large monophyletic group at family rank. To arrive there, this family has undergone much systematic and taxonomic change. Among those fishes that remain in the Characidae for the time being are the tetras, comprising the very similar genera Hemigrammus and Hyphessobrycon, as well as a few related forms such as the cave and neon tetras. Fish of this family are important as food and also include popular aquarium fish species.

These fish vary in length, though many are less than 3 cm (1.2 in). One of the smallest species, Hyphessobrycon roseus, grows to a maximum length of 1.9 cm.

These fish inhabit a wide range and a variety of habitats. They originate in the Americas, ranging from southwestern Texas and Mexico through Central and South America. Many of these fish come from rivers, but, for example, the blind cave tetra even inhabits caves.

This family has undergone a large amount of systematic and taxonomic change. More recent revision has moved many former members of the family into their own related but distinct families – the pencilfishes of the genus Nannostomus are a typical example, having now been moved into the Lebiasinidae, the assorted predatory species belonging to Hoplias and Hoplerythrinus have now been moved into the Erythrinidae, and the sabre-toothed fishes of the genus Hydrolycus have been moved into the Cynodontidae. The former subfamily Alestiinae was promoted to family level (Alestiidae) and the subfamilies Crenuchinae and Characidiinae were moved to the family Crenuchidae. 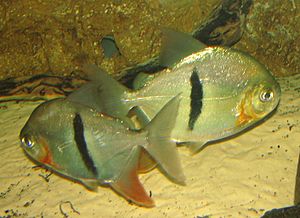 Other fish families that were formerly classified as members of the Characidae, but which were moved into separate families of their own during recent taxonomic revisions (after 1994) include Acestrorhynchidae, Anostomidae, Chilodontidae, Citharinidae, Ctenoluciidae, Curimatidae, Distichodontidae, Gasteropelecidae, Hemiodontidae, Hepsetidae, Parodontidae, Prochilodontidae, Serrasalmidae, and Triporthidae.

The larger piranhas were originally classified as belonging to the Characidae, but various revisions place them in their own related family, the Serrasalmidae. This reassignment has yet to enjoy universal acceptance, but is gaining in popularity among taxonomists working with these fishes. Given the current state of flux of the Characidae, a number of other changes will doubtless take place, reassigning once-familiar species to other families. Indeed, the entire phylogeny of the Ostariophysi – fishes possessing a Weberian apparatus – has yet to be settled conclusively. Until that phylogeny is settled, the opportunity for yet more upheavals within the taxonomy of the characoid fishes is considerable. 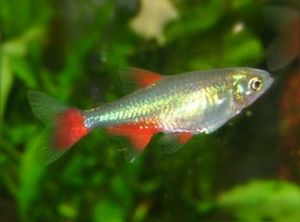 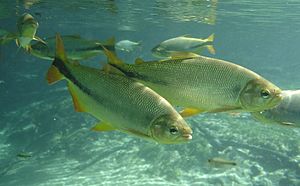 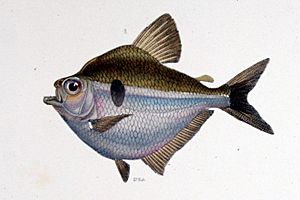 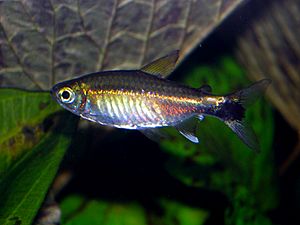 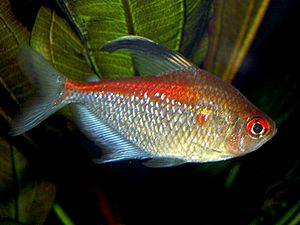 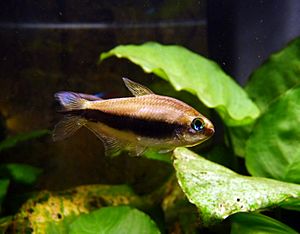 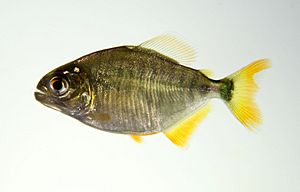 The subfamilies and tribes currently recognized by most if not all authors, and their respective genera, are:

The Chalceidae, Iguanodectidae, Bryconidae and Heterocharacinae are the most recent clades to be removed in order to maintain a monophyletic Characidae.

A large number of taxa in this family are incertae sedis. The relationships of many fish in this family – in particular species traditionally placed in the Tetragonopterinae, which had become something of a "wastebin taxon" – are poorly known, a comprehensive phylogenetic study for the entire family is needed. The genera Hyphessobrycon, Astyanax, Hemigrammus, Moenkhausia, and Bryconamericus include the largest number of currently recognized species among characid fishes that are in need of revision; Astyanax and Hyphessobrycon in the usual delimitation are among the largest genera in this family. These genera were originally proposed between 1854 and 1908 and are still more or less defined as by Carl H. Eigenmann in 1917, though diverse species have been added to each genus since that time. The anatomical diversity within each genus, the fact that each of these generic groups at the present time cannot be well-defined, and the high number of species involved are the major reasons for the lack of phylogenetic analyses dealing with the relationships of the species within these generic "groups".

All content from Kiddle encyclopedia articles (including the article images and facts) can be freely used under Attribution-ShareAlike license, unless stated otherwise. Cite this article:
Characidae Facts for Kids. Kiddle Encyclopedia.